A Celebration of People on Bicycles in New York City 6 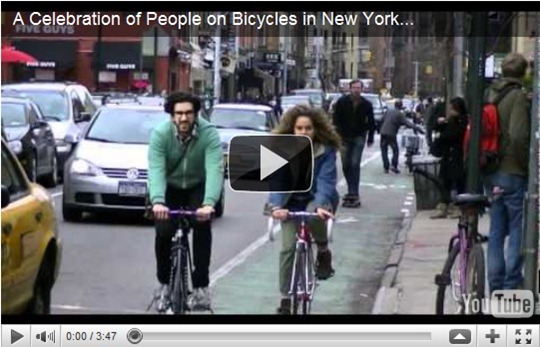 While down in New York City last weekend I managed to take some video footage of everyday New Yorkers who choose bicycles as their mode of transportation. I put this short film together that celebrates these New Yorkers who are contributing to making New York a better place.

Although my hometown Toronto seems to have a higher concentration of everyday people on bicycles than what I saw in Manhattan, ridership in New York has nonetheless been steadily increasing since the city began investing in dedicating some space for people on bicycles under the leadership of Janette Sadik-Khan.

The streets of New York are the safest they have been in the last 100 years of recorded history.

The city’s infrastructure is still in its infancy and has a long way to go even just to improve its existing infrastructure. For instance, one of its main protected bike lanes goes right through the middle of Times Square – which results in awkward detours for bicyclists to avoid having to ride through thousands of pedestrians.

Having said that, the city has improved by leaps and bounds in the past 4 years to improve its liveability and in making it more comfortable and safe to use a bicycle.

I hope the city will continue down this path – despite the selfish opposition it faces from a minority of New Yorkers.