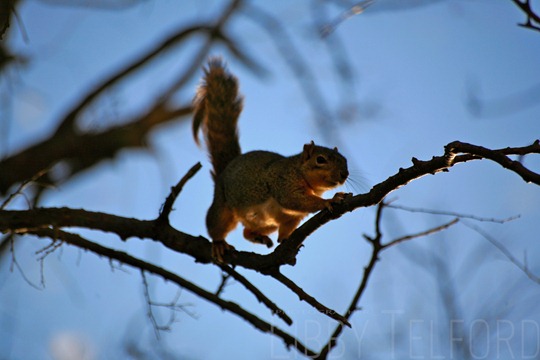 A BMW driver cruises along a scenic boulevard with his top down while enjoying the beaming sun on a warm beautiful summer afternoon.

Out of nowhere, an unrelenting squirrel dashes across the road only metres in front of the shiny black automobile. The driver puts his entire body mass into the brake pedal of his car – skidding to a halt mere inches from the terrified, frozen squirrel.

His heart pounding, he wipes the sweat from his forehead before proceeding on his way – relieved to know that the squirrel will live to see another day.

Minutes later, while the 3 lanes of eastbound traffic build up, the driver becomes anxious about reaching his destination. While driving along the right lane, the driver encounters a slow-moving cyclist.

Furious that the cyclist has the nerve to slow him down, he passes the cyclist while accelerating his car – brushing the side of the cyclist – before quickly slowing to a halt at the line-up of cars only 30 metres ahead.

“How dare he get in my way”, the driver ponders to himself, as the cyclist proceeds past the now stopped motorist – shaking his head in disappointment at the red faced driver of the BMW.

Why is it that our automobile society puts more value in the life of a squirrel than a human being?

They say in North America that running down a cyclist is the only legal form of murder, and in some ways this is true.

The now famous anti-cyclist, ESPN’s Tony Kornheiser discussed this phenomenon with Lance Armstrong during their make-up session – one day after Kornheiser went on his rant about running down cyclists because he was angry about bike lanes being installed in Washington DC.

“I don’t know, I often times, I mean I’ve seen cars do all kinds of crazy things to avoid squirrels, and cats and dogs, and tractors, and horses and sheep and runners and everything else, but…

I’m not nearly smart enough to be able to figure out why it is that a single cyclist or two cyclists, or a group of cyclists even – even if they are 2 abreast or trying to stay out of the way – why that gets people so angry sometimes.”

There is some irony in that Kornheiser – the man who went on a raging rant about running down cyclists – has the audacity to ask Lance Armstrong why it is that drivers get so angry about cyclists.

But despite Kornheiser’s ignorance, Armstrong raises an important point. The person that Kornheiser is “tapping” as he passes in his automobile is a human being. It could be a child trying to get to school, or an elderly person cycling to the post office, or as Lance says, it could be a 40-year-old woman who recently started riding a bike.

So why is it that motorists get so angry?

There are dozens of arguments that motorists have about why cyclists shouldn’t be on the road – all of which are non sequitur. For example, roads aren’t built for bikes, cyclists don’t pay any taxes, cyclists aren’t insured and don’t pay license fees, cyclists don’t obey the traffic laws, etc, etc.

But these are just excuses or justifications for motorist anger – they don’t get to the root cause.

The real reason many motorists in North America have contempt for cyclists I think, is because they can’t identify themselves with cyclists – they couldn’t see themselves sitting on that bike seat.

But so many people in North America have been ingrained in the auto-centric society for so long that they could never picture themselves getting around any other way than driving. It’s the North American way – you work hard, and you buy as much of an automobile as you can afford (or not afford) – to show your neighbours how successful you are (or aren’t).

Bikes are for socialists, hippies, and loony environmental types who are on a suicide mission – not for real middle class people.

Unfortunately, this is the result of decades of investment in our auto-centric culture.

With a growing desire to become less dependent on fossil fuels and a growing rate of obesity, this has to change. And it is changing as evidenced by the United States’ Department of Transportation’s recent declaration that pedestrians, cyclists and motorists are equals.

As Lance points out in the interview, there needs to be mutual respect between motorists and cyclists:

“To your point of this interaction and this relationship between people on bikes and people in cars. It meets a wall sometimes, and I think that obviously that’s a relationship that has to co-exist now and forever because as I mentioned yesterday to you, we’re both going to be around forever. It’s one that is going to require mutual respect. “

Hopefully the day will come in North American when a passing cyclist will remind a motorist of his mother, or his daughter, or his brother or his nephew… or himself…

On a related note, I think Lance Armstrong could make a world of difference if he shifted his efforts toward promoting utility cycling.