Have you ever wondered what it’s like to ride a bike in China? The short film above shows footage of me pedaling around Haikou City yesterday – the capital of the province of Hainan, China. Haikou’s population is somewhere around 1 million people – and I’d be willing to bet there are close to 1 million scooters in Haikou – they are everywhere!

Like most North Americans, when I first visited Haikou in 2007 my first instinct was that you would have to be crazy to ride a bike in this city. It seems like madness – cars rarely stay within the painted lines and motorcycles, bicycles and scooters frequently ride the wrong way and rarely stop at red lights.

But after 3 days of cycling around Haikou, I have never felt safer cycling anywhere else in the world (I haven’t yet visited the Netherlands).

Although it might seem chaotic, everyone drives much slower here than in North America. Even on highways, people rarely drive faster than 80km/h. Within the city, when a car passes you, they usually leave you lots of space. If they don’t leave you a lot of space, they pass you at a slow speed.

It also helps that there are cycle tracks on almost every street in the city for bicycles. There is nothing more comfortable for me than being physically segregated from automobile traffic in a city. 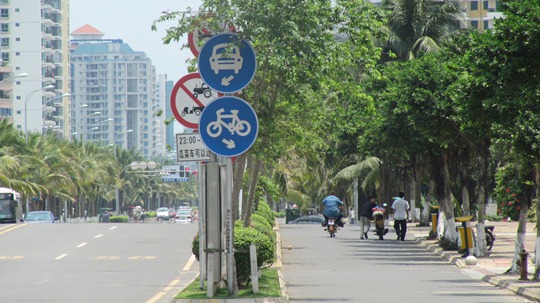 In Toronto, cars will periodically pass you at a high speed and dangerously close. Zigzagging around a pothole could be enough to put you in the danger zone of passing vehicles. There are many drivers who don’t think bikes belong on the road – thanks in part to negative media about cycling.

Here in China, everyone has a right to the road and you will rarely see anyone get angry at anybody else. It’s just like a river flowing, and you just go with the flow. Everyone is part of the same team here – there is no us vs. them, there is no “war on the car”, or “war on the bike” – it’s just a bunch of people trying to get from point A to point B.

One thing people forget in Toronto is that both cyclists and drivers are just people trying to get to their destination within a reasonable time.

The fact that nobody gets mad here made me realize how much we complain about EVERYTHING in Canada. It doesn’t matter what it is, we complain about it – bikes rolling through stop signs, cars stopped in the bike lane, bikes going the wrong way on a one-way street, pedestrians crossing at mid-block, etc.

We really need to relax a little bit in Canada. We are so uptight about everything that we are going to drive ourselves to heart attacks. Our society is so overly civilized that we might as well be robots. There is nothing interesting about living life like a robot – and complaining when another robot disobeys a traffic law that probably shouldn’t be a traffic law in the first place.

But we have put so many rules in place that it makes drivers, cyclists and pedestrians so numb that they feel they don’t need to pay attention. In China, people drive slower because there could be a pedestrian crossing, or there could be another car merging. In Canada, when the light turns green, drivers feel entitled to put the pedal to the metal, and many pedestrians simply walk when the sign says walk without looking.

And what is the result of having so many rules? People complain more because they saw someone who disobeyed the rule.

Do all these rules actually help save lives? I’d bet that there are less traffic fatalities here in Haikou than in Toronto (per capita) – though I don’t have any statistics to prove or disprove this.

In the interest of not getting too far off topic, I hope you enjoy the video!

I have said this many times before, but seeing a city on a bicycle is the best way to see a city. Buying a fold-up bicycle here in China was a great idea, and I will be able to take it with me on other trips in the future.

Stay tuned – more articles from my 3-week trip to China are on the way. Music for the film was provided by DanoSongs.com.