Why Do Cyclists Blow Stop Signs? 13 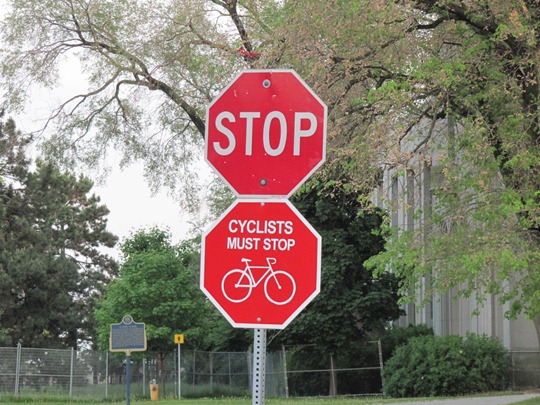 All photos by James D. Schwartz

I came across this unique stop sign while walking the dog at the Exhibition grounds here in Toronto. It is a regular stop sign outfitted with a secondary stop sign that reads “CYCLISTS MUST STOP”.

The implicit message that I gather from this stop sign is that regular stop signs don’t apply to cyclists. But because this sign explicitly states that cyclists must stop, cyclists must of course obey it.

Yes you scofflaw “cyclists” MUST come to a complete stop, put your foot down, look both ways, then proceed when it’s safe.

I can’t think of a more useless appropriation of government tax dollars than to put a stop sign specifically for cyclists at this junction.

If this was a dangerous intersection where cyclists were potentially harming themselves or others, then I could understand why they would put up this sign. But this is such a low-volume intersection that when I sat there for 45 minutes one morning, not a single car, bus or bicycle bothered to stop here.

Because of the road layout, most cyclists and drivers turn right at this intersection. The curb is even curved around the corner as if it was never meant to be a stop sign in the first place: 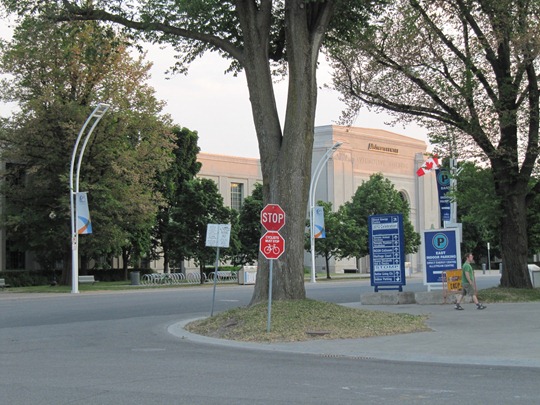 Anti-cyclists commonly make the claim that cyclists have no right to be on the road because they don’t obey the traffic laws, and blowing through stop signs is one commonly cited examples of why drivers have the right to seek vengeance against people on two-wheels.

Before criticizing “scofflaw” cyclists, drivers should get their own ducks in a row. In addition to very few motorists stopping at stop signs, take a drive along any highway in the Toronto area and you will have difficulty finding A SINGLE PERSON who drives within the MAXIMUM speed limit of our highways (excluding rush hour traffic congestion of course).

Which begs the question, why do we have so many stop signs in the first place? While traveling China last month, I didn’t come across a single stop sign. High traffic roads use traffic signals, and local residential street intersections are treated as a “yield”. This actually helps reduce the traffic speed, because drivers always need to be aware of what they might encounter.

In the Netherlands, yield signs are complemented by other traffic calming measures, such as low speed limits, narrow streets, and dead-ends to prevent motorists from using quiet streets as thoroughfares.

Here in North America, drivers don’t pay attention nearly as much because they have a false sense of security with all our traffic signals, stop signs, and rules. This encourages motorists to drive faster and be less aware, and possibly even bored.

Out of boredom comes distractions (cell phones, coffee, radios, etc), and some drivers even fall asleep at the wheel.

In Idaho, they have implemented what is commonly known as the “Idao stop”, whereby cyclists are allowed to roll through stop signs in that state (if they are not impeding with other vehicles of course).

It’s a brilliant law, because a cyclist rolling through a stop sign isn’t going to kill anyone. Of course if the cyclist encountered pedestrians or vehicles at the intersection, he/she would treat the intersection as a regular stop sign.

As long as traffic engineers continue putting stop signs everywhere as a short-sighted way of calming traffic, you will always have motorists and cyclists alike disobeying these stop signs when it is safe to do so.

13 thoughts on “Why Do Cyclists Blow Stop Signs?”