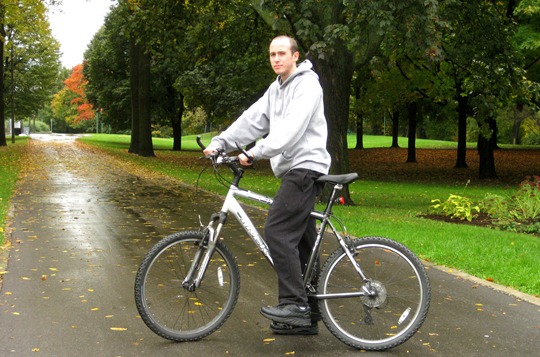 Bicycling Newcomers is a section on The Urban Country where we profile people who make the switch from other modes of transportation to the efficient, healthy and fun method of bicycling to go about their daily business.

Our latest instalment of Bicycling Newcomers profiles one Tom Schwartz. Tom is a Corrections Officer and commutes on his bicycle from Toronto’s Danforth area to Warden and Eglinton each day – an 8km commute.

We asked Tom a few questions about his bike commute:

How did you previously commute to work before you started riding to work? How long did it take you?

[TS] I took the Subway (TTC) and then I would hop on a bus from the subway station to work. Every day seemed to take a different amount of time – on a good day it might take 30 minutes, on a bad day it would take 45-50 minutes (the number of people taking the bus, the frequency of the bus/subway would all play a factor).

How long does your new commute take by bike?

[TS] It takes about 30 minutes to work and 25 minutes home (downhill).

What triggered your decision to start riding a bike to work?

[TS] It’s cheap, it’s a good workout, and it’s much more convenient than taking the TTC.

How comfortable is your bike commute? Are there roads that you try to avoid?

[TS] I ride along the Danforth for most of the trip and it can get a little tricky at times with parked cars and the traffic, but for the most part it is fairly safe since there are two lanes and there is generally enough room in between the parked cars and traffic. Generally the roads that I avoid are ones that have high traffic volume without the space for parked cars and no bike lanes (e.g Warden Ave).

[TS] I enjoy my trip up Pharmacy Ave. because it has bike lanes and the traffic isn’t as busy. 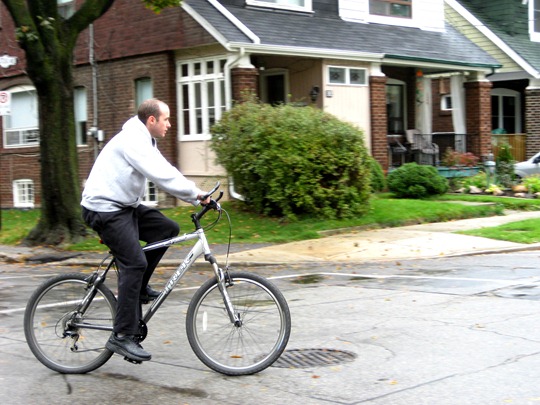 [TS] Using my bike is mostly for recreation and commuting. I don’t like to leave my bike outside if I was to go shopping or do errands due to the fact it might get stolen – but honestly I wish I could.

What are your pet peeves about your commute to work? (e.g. drivers, lack of bike infrastructure, other cyclists, etc)

[TS] The best thing to do is plan your trip ahead of time and check for the routes that have bike lanes. Toronto is full of great bike paths but home to some pretty treacherous and dangerous roads.

It’s very unsafe and annoying when people are aggressive while riding a bike (weaving in and out of traffic, running red lights). It gives all other cyclists a bad name, and they do it just to save some extra time; but chances are I’ll be right behind them at the next stop light anyway. So please just take it down a notch sometimes!

Have you become an advocate for better infrastructure? Have you joined the Toronto Cyclists Union yet to advocate on your behalf?

I am considering it.

We offered Tom the following tips to get the most out of using his bicycle for transportation and make his daily commute even more pleasant and enjoyable:

One comment on “Interview With Bicycling Newcomer Tom Schwartz”