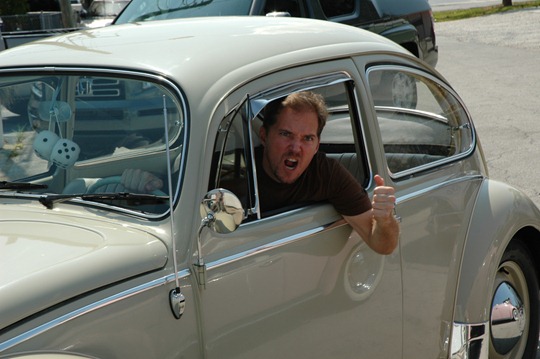 Friday’s extreme road rage incident in Brazil where a motorist plowed through dozens of bicyclists has revealed something about our society. Something that we already knew, but seems to be hitting epic levels. Motorists are angry. They are frustrated with being stuck in traffic while reminiscing on the “old days” when you could always get to your destination in a consistent and reasonable time.

Those days are gone in many cities across North America where populations are ever-increasing and are comprised of a limited amount of road space. Drivers spend more time in their car than ever, and their frustration and anger has not gone unnoticed.

But getting angry at a person on a bicycle is counterproductive for motorists. The last thing a motorist should want is to intimidate a bicyclist and force them off their bicycle and into an automobile. The more people on bicycles, the more space there is for motorists.

This frustration and anger is evident in the comments received on our article on the Brazil incident.

However, most motorists who left comments condemned the actions of Ricardo Neis – who accelerated full speed ahead through a group of more than one hundred people on bicycles. What Neis did is akin to pulling out a gun and indiscriminately shooting people, so it would take a troll or a sociopath to not condemn this attempted mass murder.

Sympathizing with the madman

But many of them nonetheless sympathized with Neis, saying the Critical Mass riders were asking for it by provoking drivers – some of them sharing their own stories of being delayed by Critical Mass.

It seems North Americans have a tendency to sympathize with drivers who use their cars as weapons – perhaps because they are often in a similar situation where they feel like slamming into someone else who did something to make them angry.

It can’t be reasoned however that drivers are specifically targeting bicyclists with their frustration and anger because it seems drivers are angry at other drivers too. And buses, streetcars, taxis, traffic signals, pedestrians, and just about anything else that causes them to lose 10 seconds of their precious day.

Thus, it’s not surprising that drivers become angry when they encounter Critical Mass rides. Being delayed by people who are smiling, singing and having a good time makes some drivers seethe. At least when drivers have to sacrifice 5 minutes of their day to wait for a funeral procession, the funeral procession participants aren’t smiling and waving and having a great time on their way to the cemetery.

When it comes to Critical Mass, drivers seem to despise the “smug hipsters” that “cork” the intersections to clear the way for the Critical Mass participants. They take it personally, presuming that Critical Mass exists only to give a big fat middle finger to motorists.

Critical Mass participants don’t deserve to be run down

But whether you agree with Critical Mass is irrelevant. Nobody deserves to be threatened with death simply because they are participating in an event that happens to hold up a handful of drivers.

And although Critical Mass might not be important to a motorist, it’s really important to a lot of other people. It’s an opportunity for people on bicycles to enjoy exclusive access to the streets we pay for – for just a couple hours once a month.

Sadly, the Critical Mass rides are the only opportunity where it’s safe enough for a 7-year-old child to ride on our streets.

You can only imagine how thrilled his son is on these rides, cruising along downtown streets in between tall buildings without having to worry about being squeezed to the curb by automobiles.

It’s actually quite magical – and very important to my friend and his son.

And if riding on the streets on a normal day in Toronto is dangerous for a 7-year-old, then one can only imagine how dangerous it would be in bike-unfriendly Brazil. Critical Mass is likely one of the few opportunities Brazilians can feel safe on their streets (or so they thought).

All road users seem to have this attitude that their time is more important than anyone else on the streets. This self-centered attitude is what causes our blood to boil anytime we are delayed from getting where we need to go.

When I was younger I used to get angry while driving (road rage is in fact contagious). But about 6 years ago, I was angry that I was late and traffic wasn’t moving. The friend asked me what was the point in getting so angry – there’s nothing you can do about it, so you might as well stay calm and not have your heart rate go through the roof.

It takes a bit of self-discipline, and there are times when I’m tempted to snap on a driver that drives aggressively near me, but staying calm is almost as contagious as road rage. Getting angry all the time will literally take years off your lifespan.

Perhaps we can learn from the Chinese. Road rage is virtually nonexistent there. There seems to be a common understanding that everyone is in the same situation and everyone needs to get where they are going, but no one person thinks they are above the masses (excluding government officials of course). It’s this sense of entitlement that we have here that seems to result in our anger.

And instead of sympathizing with a motorist who tried to murder dozens of bicyclists, perhaps motorists here in North America could sympathize with the people who are showing their young kids a world that they didn’t know existed for just a couple hours at the end of each month.

That would be more productive for everyone, and it might even add a few years to their lifespan.