Getting To The Airport By Bike – The Return Trip 7 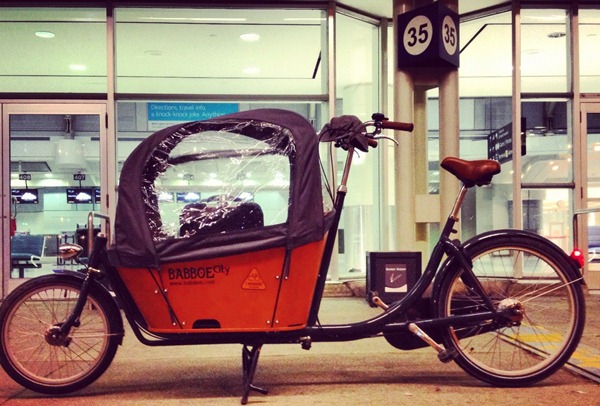 After exiting the airport terminal I walked through the automatic sliding glass doors. A cool breeze swept over me as I got outside, and at 8 degrees Celsius, I knew it was going to be a beautiful night to ride home. In the distance I could see the silhouette of my cargo bicycle, parked in a designated smoking zone near the end of the airport terminal.

I placed my luggage a couple metres away from the bike. Three young security guards were conversing with each other nearby and one of them quipped: “It’s free”, while pointing at my bike. I responded “It’s free for me because I have the keys”.

He hadn’t realized it was my bike, and his smile disappeared and a sheepish expression appeared on his face before he walked away, apparently embarrassed and surprised that someone as normal looking as myself would ride a strange bike like that.

As I pedalled away from the airport the wheels on my bike cut through puddles that were left over from a rainfall that had thankfully ceased prior to me landing in Toronto.

Exiting the airport was a dream compared to the arrival that had briefly caused some mild stress for me when I arrived at the airport last Sunday. The road that exited the terminal allowed me to get on to Airport road immediately after leaving the airport without having to cross 4 lanes of traffic this time.

Next time I ride to the airport, I will definitely take this back entrance instead of following the road signs that led me down a precarious path just five days before.

The ride home was both enjoyable and uneventful. Whomever created the bike path along Eglinton Ave is my hero, as this provided a smooth, comfortable ride for the first leg of my trip home.

Instead of going out of my way to take the waterfront bike trail, I stuck with city streets which resulted in a more direct route – knocking almost 4 kilometres off the total distance.

The city streets I chose might have provided some discomfort during Toronto’s busy rush hours, but since I rode home after midnight the ride was very comfortable; despite the lack of bike infrastructure on most streets I took home.

I arrived home just 1 hour and 8 minutes after leaving the airport. The downhill ride allowed me to sustain a much faster pace than the ride to the airport. I wore a huge smile on my face the whole ride home.

Next time I head back to the airport I know exactly how I will be getting there. This is certainly not going to be a one-time event.