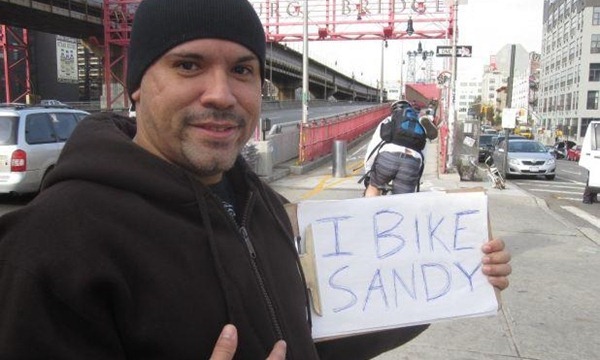 In the 1980’s, in another life, Thomas Jarrels, 46, had been a bike messenger. But he had never considered using a bicycle to commute to his job as a sous-chef at a Midtown law firm in New York City. That is until Sandy hit New York City and knocked out the subway system.

Alex from Ridgewood was in the same boat, so to speak. For the first time in 20 years, Alex used a bicycle to get to his job at NYU. He borrowed the bicycle from his landlord.

Susan Creighton, 26, biked recreationally, but had been intimidated on more congested transportation routes. Hurricane Sandy prompted her to use a bicycle to get to Manhattan after Sandy had hit. “This kind of showed me it’s not that bad,” she said.

The countless stories of New Yorkers using bicycles to stay mobile in the aftermath of Sandy perhaps provide a glimpse in the future of urban transportation.

With many of our roads at capacity and little room to expand, we have arguably surpassed “peak driving”. Americans are driving less now and increasingly looking for faster and healthier ways to get to their destination as an alternative to being stuck in traffic behind the wheel of a car.

Like the OAPEC crisis in the early 1970s, natural disasters show us how easily our way of life can be disrupted. They also show us how dependent we are on unsustainable modes of transportation.

In March 2011 we covered the role that the bicycle played in the aftermath of the massive Japan earthquake and tsunami that tragically killed 16,000 people.

Many workers in Tokyo who were stranded at the office after the earthquake walked home, while bike shops were selling out their stock to those who wanted a quicker way home. This is not surprising, considering the average commute in Tokyo is 26 kilometres.

If these natural disasters don’t open our eyes to the increasing effects of climate change, then perhaps they will at minimum introduce people to alternative modes of transportation.

Instead of being intimidated by using a bicycle to ride to work and resigning ourselves to using a car, perhaps we should gather to protest for better conditions for bicyclists.

Then perhaps it might not take a natural disaster for people to realize the benefits of a mode of transportation they had never before considered.