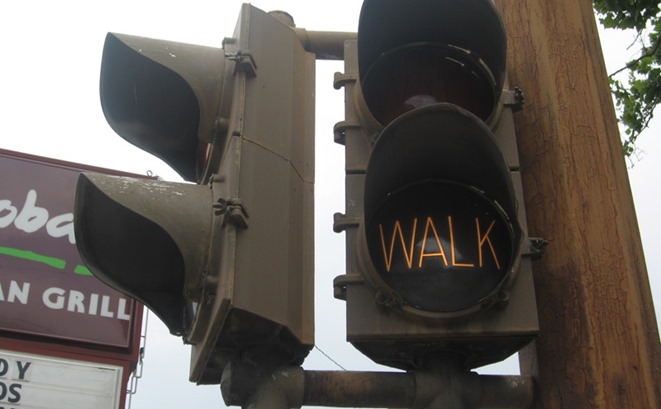 On Monday morning, nine pedestrians were hit by cars in Toronto in under an hour – between 6:41AM and 7:24AM, according to the Toronto Star.

These incidents triggered an infuriating PR campaign by Constable Client Stibbe on Twitter where he tore the victims a new one by squarely laying blame on the pedestrians, ignoring the careless driving that caused these incidents in the first place.

The media didn’t help either. In a total of 414 words, the Toronto Star failed to place any blame on careless drivers or offer any sort of advice to drivers to prevent these types of collisions.

“In the first incident, a woman pushing a stroller was hit. The driver faces charges of careless driving. “One of the common things we’ve been hearing from drivers is, ‘We didn’t see them,’ ” said Stibbe. “You need to make sure you do gain eye contact with drivers of the motor vehicles.””

In the above quote, the Constable absolves drivers from blame and puts the blame squarely on the woman pushing the stroller.

I am not at all surprised that a common thing to hear from a driver is “we didn’t see them”. When faced with possible charges, a driver has a couple choices: 1) Admit that he was distracted, driving carelessly, or negligent, and probably be charged, or 2) Say that he didn’t see the pedestrian that he hit, and most likely not be charged.

Despite this, the Constable implies that it is acceptable for a driver not to see a pedestrian when turning at an intersection, and that the onus is on the pedestrian. How dare the mother get herself hit by a car and make the driver late for work.

Further, despite the fact that none of the incidents reported that the victims were legally listening to their ear phones, the Star article had this suggestion for pedestrians:

“Police and experts stress that pedestrians should remain visible and vigilant when walking around. High-visibility clothing is obviously an important thing to do and be aware of your surroundings. If you’re walking on your street you’re distracted and having your iPhone on in your ears, you don’t hear what’s going on,” said Tremblay.

Charges have been laid against the drivers in 3 incidents so far, and at least two occurred at crosswalks. Instead of chastising drivers for their illegal driving, Constable Stibbe offered up other factors as the root cause:

“It’s a combination of weather conditions, as well as lighting conditions meaning obviously the time of day, additionally the lack of visibility on behalf of pedestrians.”, Constable Clint Stibbe

In the original Star article, Constable Stibbe tied the incidents to the clothing:

“Toronto police Const. Clint Stibbe said in each of the cases, the pedestrians were wearing dark clothing. “We’re not saying pedestrians actually did anything wrong,” he said, “but wearing the dark clothing makes you less conspicuous to other road users.”

I couldn’t make this stuff up if I tried.

In his TEDx talk entitled “Bicycle Culture By Design”, Mikael Colville-Andersen touches on this topic:

“Let’s look at the streets themselves. What are streets? For 7000 years since cities first were formed streets had a very singular definition. People gathered in them, transported themselves, sold their goods, children played in them. Streets were an extension of our homes and our living rooms. They were public domain. Probably the most democratic spaces in the history of homo sapiens.

Now many people seem have a perception that streets are the sole and exclusive domain of automobiles.

The automobile industry started campaigns against what they called jaywalking. In the American slang back then, a jay was a mocking term for a country bumpkin, who didn’t know the ways of the big city.

People were ridiculed for trying to cross the street in the middle of the block – a 7000 year old habit. Boy scouts were enlisted to hand out flyers chastising these people. People who were against cars were labeled as old-fashioned and standing in the way of progress. This was all effective. Nobody likes to be called old fashioned or ridiculed.

Pedestrians were herded into these crosswalk things. Children were shephereded into newly invented things called playgrounds and finally, these irritating obstacles were removed. The stage was set for a paradigm shift. Probably the greatest paradigm shift in the history of our cities.”

We ask questions that avoid getting to the root cause

In 2011 I wrote in an article entitled “Responsibility and Accountability on Our Streets”:

It is about time we stop blaming the victims, and get to the root cause of the problem: distracted, dangerous driving. Drivers need to drive more cautiously, slow down, look, put their phones down, and watch out for more vulnerable road users.

There is nothing wrong with making suggestions that pedestrians be vigilant, but not before telling drivers to be cautious first and holding them accountable when they are careless or negligent.

No matter what clothes a pedestrian is wearing, if a driver can’t see the pedestrian crossing the street on a green light, at best they need to slow down and be more aware of their surroundings. At worst, they shouldn’t be driving in the first place.