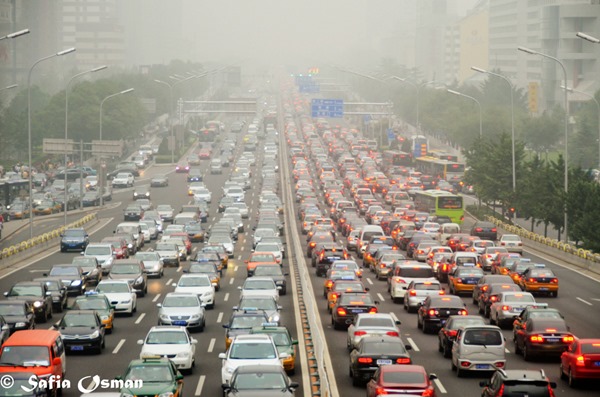 Unlike in North America, when the siren from an ambulance is wailing, drivers in China do not move over to let the ambulance past. Ambulances literally sit in traffic with everybody else – with their sirens on and lights flashing.

I had witnessed this countless times while living and travelling in China, but it really struck me when I was in Beijing in May and we were sitting in traffic congestion. A few cars ahead of me, an ambulance was just sitting there not moving. There was plenty of space for cars to move over, but they didn’t.

In fact, there was an emergency lane on the right where cars aren’t supposed to drive, but do anyway, and the ambulance was stuck behind all the cars.

One can only imagine the outcome of such a situation – people needlessly dying while stuck in traffic.

Indeed, that is exactly what happened, as reported by Shanghaisit:

“A woman has died in Beijing when the ambulance that was transporting her to hospital got stuck in traffic.

An emergency physician working alongside the paramedics vented her frustration online, “The scene of the accident is no more than 3 kilometers from the hospital, yet it took us a good 40 minutes to arrive there! Barely any cars made way for our ambulance! So woeful!” The tweet, posted to Weibo by user ‘Monica-Xiaomo’, was shared over 30,000 times.

Other Weibo users responded to the doctor’s frustration, some blaming the drivers for having “cold-blooded souls” that they would not move out of the way for an ambulance (though, to be fair, in very heavy traffic there is little one driver can do). Others pointed to the allegedly frequent abuse of sirens by police cars and ambulances which they said had led to a “loss of trust”.

The driver of the ambulance told Sina News that about half the drivers on the roads typically do not move out of the way of an ambulance. Worse, some drivers “purposely slow down ahead of me if I signaled them to move to other lanes”.

When I visited Shanghai in 2010 I saw handicap parking for bicycles, and there were plenty of wheelchair bicycles that were used to transport people who can’t walk on their own.

On one of these wheelchair bicycles, it would have taken no more than 15 minutes to go three kilometres, at a modest pace. In a hurry, you could reach the hospital in less than 9 minutes – even on a cargo bicycle carrying a passenger (or a patient).

Thirty years ago Beijing was a city that had a pulse. People largely moved by foot and by bike. There was a sense of community in the city, you talked to your neighbours. Now the city has been overrun by roads and traffic.

All side effects of the American-style car culture that has been sweeping over China for the last decade.

One comment on “Beijing Woman Dies Because Ambulance Stuck in Traffic”