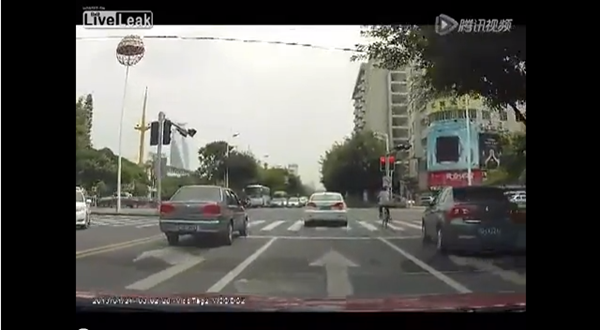 A driver’s dash cam caught on video a cyclist in Shanghai getting hit by a driver who had suddenly turned from the centre lane.

Despite the unfortunate and misleading title of the video given by Shanghaiist writer James Griffiths, the driver was clearly at fault. She had suddenly turned from the centre lane into the path of the cyclist. Both the driver and the cyclist were going through a light that had just turned red as they were entering the intersection.

The fate of the cyclist in the video above is unknown, but I would certainly expect him to survive this collision.

Perhaps the saddest aspect of this situation is that several people who commented on the video were surprised that the driver had actually stopped. China has a history of the general public having complete apathy for strangers who are in trouble.

This everyone-for-themselves attitude hit rock bottom in an extremely disturbing 2011 video of a two-year-old girl who was run over by a van and left for dead by more than a dozen passer-bys who literally stepped over the dying girl (read about this on the Huffington Post). If you should be so inclined to watch the video, please be prepared for tears and emotion to emanate from yourself.

This brought the issue into the consciousness of the Chinese and hopefully will serve to help eliminate the culture of apathy towards strangers.

Chinese apathy not always the norm

This apathy towards strangers is not always the norm however. When I was living in China last year I had witnessed a young lady on a scooter who rode into the side of a turning car. In that situation it wasn’t the driver’s fault – the girl on the scooter was riding very fast and drove directly into the side of a car that was turning slowly on a green light.

We rushed to help the girl on the scooter, and I think she may have incurred a concussion because she seemed dazed and her head was bleeding. The driver of the car was extremely kind and cared for the girl until the ambulance arrived.

This is the type of warm and caring attitude that the Chinese are known for within their groups of families and friends, being graciously extended to a stranger in need.

The YouTube video that is the subject of this article was first spotted on Shanghaiist.

4 thoughts on “Shanghai Cyclist Hit By Driver Caught On Video”