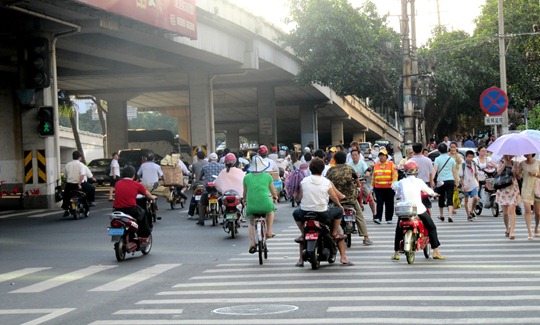 When it comes to sharing – the Chinese lead the world. Whether in a restaurant, or on the streets, the Chinese share their resources without the sense of entitlement that we feel here in North America.

As a result, you won’t find angry road users who feel they have more of a right to the road than somebody else. Road rage is seemingly rare in China compared to North America.

Here in Toronto, if someone honks their horn at you, they are probably very unhappy about something you did. A honk in China is like saying “hey friend, heads up – I’m coming through”.

While riding a bicycle around China, I didn’t feel that I was a target of resentful motorists who didn’t think I belonged on their streets. I just felt like I belonged. I was just someone who was looking to get from point A to point B.

Here in North America, we have all encountered motorists, pedestrians and bicyclists who have that sense of entitlement that results in anger and sometimes escalates into rage.

Road rage is a disease in our society that gets perpetuated through the media. People get angry when they read sensationalist articles – then they get behind the wheel and sometimes take out that anger on other road users.

The following video footage was shot while I was visiting Haikou, Hainan earlier this year. It highlights the diverse types of users sharing the road space in that Chinese city of about 1 million people.

Try to count the number of different types of road users sharing these streets. Like a river, the traffic just flows:

Even though the Chinese are great at sharing road space, they have also been great at separating automobiles from scooters and bicycles when speed limits are too fast to safely share the roadway.

Here are a few photos of segregated bicycle facilities in the same Chinese city. These photos more accurately reflect “complete streets” than the streets depicted in the video above. 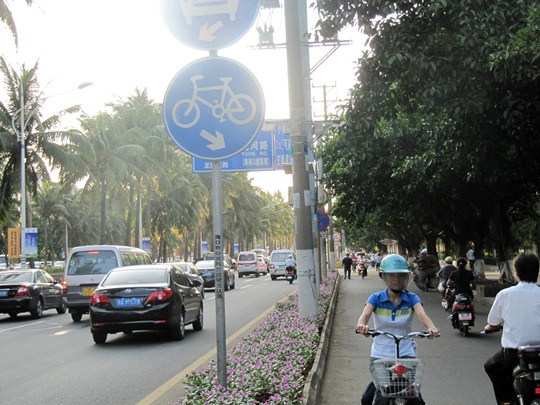 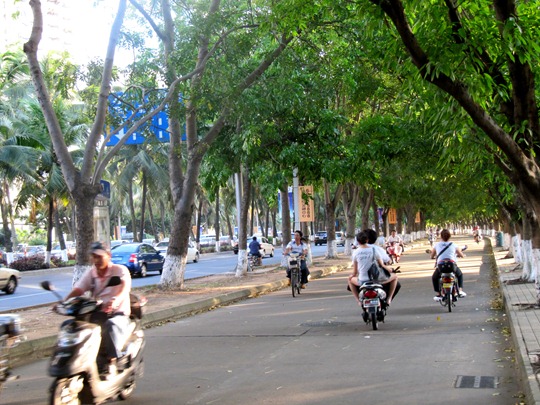 The following photo shows a bike path that continues behind a bus stop to avoid conflict between scooters/bicycles and bus passengers: 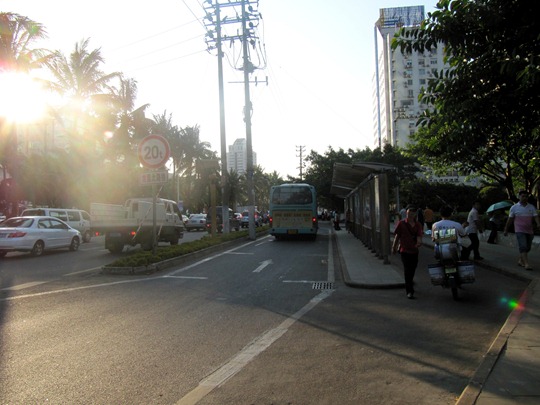 These few examples highlight how certain streets can safely be shared amongst different types of road users. Other streets on the other hand require segregated facilities to prevent conflict between motorists and bicyclists.

3 thoughts on “Complete Streets in China”