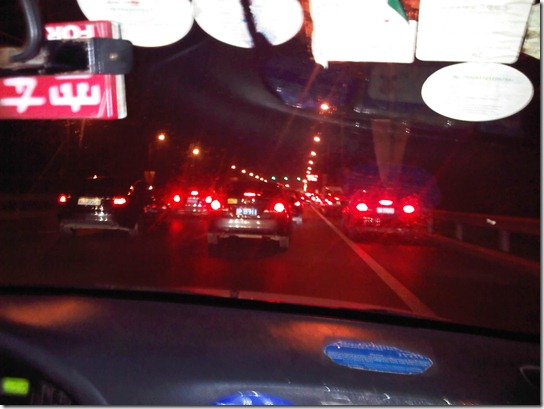 Beijing’s traffic congestion nightmare is perhaps best attributed to the much hailed Deng Xiaoping, the architect of China’s “socialist market economy” – which opened China up to foreign investment and brought significant wealth to the people of China over the past 30 years.

Xiaoping posthumously helped turn Beijing – a city of millions of bicycles – into a city clogged by cars.

Despite Beijing’s extensive ring highway system and its fourteen lane highways cutting through the city, it is still difficult to drive a car in Beijing without encountering traffic congestion.

Playing the lottery in Beijing

To address the rapid increase in car ownership, Beijing has a lottery system that only allows 20,000 new license plates to be registered each month. “Wanna-be” car owners have a 1 in 32 chance of “winning” the opportunity to register their car to provide them the privilege of sitting in Beijing’s traffic congestion.

Last Monday while in Beijing we hopped into a taxi at our airport hotel to meet a family friend for dinner. En route to the restaurant at about 8PM we encountered heavy traffic congestion. The taxi driver told us that the congestion was a result of the 2012 Beijing auto show.

No matter how much you spend on a luxury car, you will still be sitting in the same traffic jam as everybody else.

Speaking of which, unlike in North America, drivers in China rarely pull over to let emergency vehicles past. This is perhaps nowhere more apparent than on the clogged highways of Beijing.

On our 40 minute drive to dinner, we saw two ambulances with flashing emergency lights and sirens, who were stuck in traffic hardly moving. Nobody made any effort to move over to let the ambulance pass.

The problem has been slowed, not stopped

Despite everything the Beijing government is doing to reduce traffic congestion, there are still 240,000 new cars being added to Beijing’s streets each year. The problem has indeed been slowed, but not stopped.

The best way to truly address traffic congestion is to simply add monetary value to the public good that is in scarce supply – in this case the roads. Congestion fees are a win-win solution because they raise money to improve public transportation and they can eliminate traffic congestion when priced properly.

Roads can still be free to use at off-peak hours when the supply of the roads exceeds the demand, but pricing during peak hours should be done in such a way that creates optimal traffic flow efficiency – a goal that I believe is desirable by people on both sides of the political spectrum.

Here in Toronto, the topic of road tolls comes up frequently, but is quickly dismissed by the public and the media. The problem is that the conversation isn’t being framed properly. Instead of calling it “road taxes” or “road tolls”, let’s talk about improving traffic flow and eliminating traffic jams by creating optimal efficiency on our roads.

We use economic solutions for virtually all other resources that are in scarce supply. When a certain fruit is out of season and supplies are low, the price goes up in order to reduce demand so that the supply matches the demand.

When seats for a popular sporting event are in high demand, the ticket prices are raised and they don’t sell more tickets than the venue can support.

Our roads are like a sporting venue with a finite number of seats, but no limit to the number of tickets that can be sold. If we used our road approach for a sporting event the result would be overcrowding and people would be fighting over the seats (road rage?). It wouldn’t be comfortable for anyone.

Our streets should be priced in such a way that reduces the demand in order to keep automobiles flowing at optimal speeds.

Variable congestion fees will also create new incentives for people to further maximize their efficiency. Driving alone in a large SUV that is built to seat 8 people is not the most efficient way to get around. Congestion fees will create incentives for people to carpool and to take transit, while also creating funding to allow cities to create more efficient and better connected public transit systems.

The technology to achieve the goal of traffic flow efficiency through variable congestion fees is already here, but our society doesn’t seem ready to even explore the possibilities.

Perhaps when we start to experience our own 9-day, 100km long traffic jams here in North America, we will start to open our eyes.