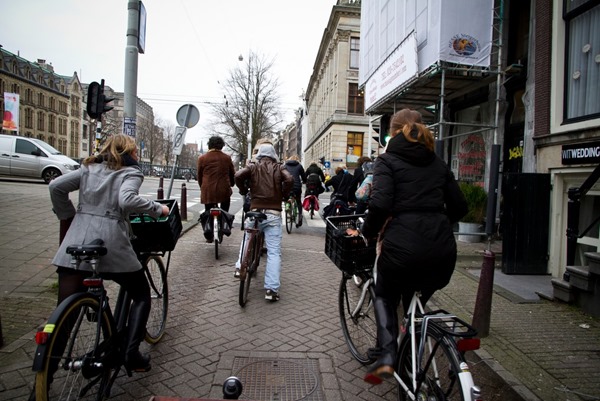 In a series of columns in a Toronto tabloid, columnist Mike Strobel has called for a ban on bicycling in the city in order to address traffic congestion, comparing bicyclists to psychos in his anti-bicycling rant that spans three articles.

Strobel’s outrageous nonsensical articles reveal more than just his fear of progress, or anything that challenges his outdated thinking. It reveals the success and growth that bicycling in Toronto has seen. He notes, “They (bicyclists) are everywhere, like earwigs in your garden”.

Strobel is so concerned about the increasing number of bicyclists in Toronto that he has resorted to inciting hatred towards anyone who rides a bicycle in the city, in the hopes of scaring them off our streets.

Strobel seems to be stuck in the 1970’s. We are all guilty of living in the past sometimes, but there is little excuse for the myths and contradictions that he propagates in his writings.

We will address some of the myths here:

“Well, maybe if you quit clogging the lane and got out of the DAMN WAY!”

“I guarantee if we ban bicycles except on paths and erase all bike lanes, driving will get much easier. “

“A bicycle ban will free up lanes and make turns safer”

“Many motorists have had it to the teeth with militant cyclists and with being scrunched into single file by, for instance, the silly Bike Lane to Nowhere on Eastern Ave.”

He then highlights two cities that have less traffic congestion than Toronto: New York City and Minneapolis:

“For starters, you’ll notice we’re far worse off than New York City, which improved from 8th to 14th of 26 cities studied by TomTom. Manhattan?! How can that be?”

“Or let’s do whatever Minneapolis is doing, since it is least gridlocked of the 26 cities.”

Funny that Strobel should mention New York and Minneapolis: two cities that have invested significantly in bicycle infrastructure over the past 5 years. New York has added 350km of bike lanes in 4 years starting in 2008 and doubled the number of bicycle commuters in that timeframe.

Minneapolis has invested heavily in bicycle infrastructure, doubling its number of bike lanes on city streets from 2011 to 2012. It too has seen a steady increase in bicycle traffic.

Traffic congestion is not caused by bicycles. It is caused by having too many cars, and too few alternatives to cars. Investing in bicycle infrastructure is indeed part of the solution to addressing gridlock. Strobel is stuck in 1970.

If the 19,000+ people who ride bicycles into downtown every day were driving cars instead, Mr. Strobel might re-think his position that it is bicycles that cause congestion.

Myth #2: Banning Bicycles Would Increase Safety on our streets

“Mackinac island bans cars. Funny thing, though: The island police report up to 30 bicycle injury accidents each summer. Hmmm. So our car drivers are the safety problem?”

Toronto has its own car-free neighbourhood. One that lacks traffic signals, features thousands of bicyclists, and has zero traffic fatalities.

In 2009, a 15-year-old bicyclist struck and killed a woman on the sidewalk after the woman fell and hit her head. This is the last known incident where a bicyclist has caused a death in Toronto. During the same timeframe, more than 200 pedestrians and more than 20 bicyclists in Toronto had been killed by motor vehicles. Furthermore, there are about 2,300 pedestrians injured each year by motor vehicles in Toronto – that is 6 per day.

Just tonight, a 37-year-old bicyclist was tragically killed by an allegedly intoxicated man driving a Dodge Durango. The bicyclist “was thrown anywhere from 30 to 40 metres through the intersection.”

And bicycles are the safety problem?

“Cars are common sense. They are our era’s horses. They’re also vastly greener and safer than your dad’s Buick. They will never go dinosaur, despite the bike cult’s best efforts.”

Strobel contradicts himself here. First he says “cars are our era’s horses” (a mode of transportation that did in fact go extinct), and in the same paragraph he goes on to say that cars “will never go dinosaur”.

Strobel is like a horse walking along with blinders on; he clearly lacks any vision. Had Strobel lived in the early 20th century, he surely would have predicted that horses would never “go dinosaur” as a viable mode of transportation.

“So we could build a version of Minneapolis’s new seven-kilometre “bicycle freeway” to downtown, which I’m sure our own cyclists would be happy to fund.

Most people who ride bicycles in the city would be happy to pay for proper bicycle infrastructure, especially if it meant we no longer had to pay for car infrastructure that we may or may not use.

Currently, people who don’t drive cars pay disproportionately more for motor vehicle infrastructure through property taxes (via home ownership or rent), and through general taxes, than the motorists who use those roads. Thus, people who primarily walk or bike are subsidizing the roads for motorists.

In fact, motor vehicles are the most highly subsidized mode of transportation. Bring on user fees for drivers and bicyclists alike.

Myth #5: Bicycles are a slow mode of transportation

“If we all rode bikes — see utopia reference above — but we’d also all have callouses, stopped backs and we’d take days to get anywhere.”

Bicycles are often the fastest and most reliable way to get around the city – especially at rush hour when walking downtown is faster than sitting in a car.

“Disciples of Toronto’s bicy-cult, in their blind hate of cars, forget there are far more drivers, just trying to get to work or pick up the kids. “

Here Strobel is trying to perpetuate the myth that bicyclists and drivers are enemies. In reality, many bicyclists are drivers too (myself included).

Many of us who ride bicycles in the city also have valid driver’s licenses and periodically or regularly drive cars in the city. Some own their own cars, while others use car sharing services and rental cars.

There is no war between drivers and bicyclists. We are all citizens trying to get from point A to point B.

“I hate bikes,” writes Janette. “No one has a clue as to their rules. I see them taking up a whole lane and cars having to get around them.”

Janette doesn’t represent the motorist camp very well, because she clearly has no clue as to what the rules are. Bicyclists are indeed allowed by law to take up an entire car lane when required.

If we want to talk about obeying laws, I was walking my dog this morning and I saw a police officer parked near the road on Lakeshore Blvd. He didn’t have his radar out, but virtually every car slammed on their brakes to slow down as they approached the officer.

I was also driving on the Gardiner expressway this afternoon, and while I was driving 90km/h (the speed limit), every single other car on that road sped past me well over the speed limit.

There are few drivers I’ve ever met who are in any position to preach to bicyclists about obeying the law.

I also created a video a while back to show that most bicyclists do indeed obey the law most of the time anyway, especially on roads with bike infrastructure.

Myth #7: Bicycles are only viable in the summer

“The nitty-gritty: Streets are designed for cars, not bikes. Especially in winter, which is most of the time.”

Strobel’s articles only serve to create more rage and hatred towards people who use bicycles to get around the city. Next time an angry driver runs us off the road, or passes us too closely, or worse yet, hits us, we have Strobel to thank for perpetuating unnecessary hatred towards us and dividing citizens who are all just trying to live their lives.

20 thoughts on “Tabloid Columnist Calls For Bicycle Ban in Toronto”