I snapped the above photo on my phone during my morning commute to a client office yesterday morning. It wasn’t the shot I was looking for, but I love it no less.

The shot I was looking for showed 18 bicyclists bunched up at a traffic signal on College street – one of our major arterial bicycle routes in Toronto. I wasn’t able to get my phone out in time before the light turned green, so I settled with the above photo – taken a few blocks later.

Portions of College street contain a mediocre 1.5 metre painted bike lane – much of it lining the door zone of parked cars. So you can imagine how surprising it would be to encounter what can only be described as a bicycle traffic jam along this street yesterday morning.

Even more surprising was the fact that the temperature at the time I took the photo was –11 Celsius with the wind chill – or about –5C without the wind chill (yes, I had to remove my gloves to get this photo).

It’s a scene only thought to be seen in Amsterdam, Copenhagen or Beijing. Dozens of bicyclists bunched up at every traffic signal – fender-to-fender congestion. I have encountered this type of bicycle congestion on this road many times in peak bicycling weather, but never have I seen this many bicyclists while there is still snow on the ground and in sub zero temperatures.

Unlike automobile traffic jams, bicycle traffic jams satisfy me to no end. The more people who use bicycles, the safer it becomes for everyone. Drivers are more cautious when there are more bicycles present, and it makes bicyclists more predictable.

It also gives bicyclists more political weight to improve conditions for everyone, relieves pressure from our transit system, and it improves everyone’s health.

This phenomenon could perhaps be attributed to the late arrival of our spring season. People are anxious for spring, and one way to make spring come early is to dust off the bicycle and start using it in the city.

This also speaks to a common vehicular cyclist argument (that I happen to agree with) – that we shouldn’t sit around and wait around for our city to turn into Amsterdam. We need to put ourselves out there and use the roads we already have at our disposal.

We need to embrace the beginnings of our bicycle culture and build on it.

After my work day, I had trouble finding somewhere to lock my bike for the first time this year – another positive sign of a growing bicycle culture: 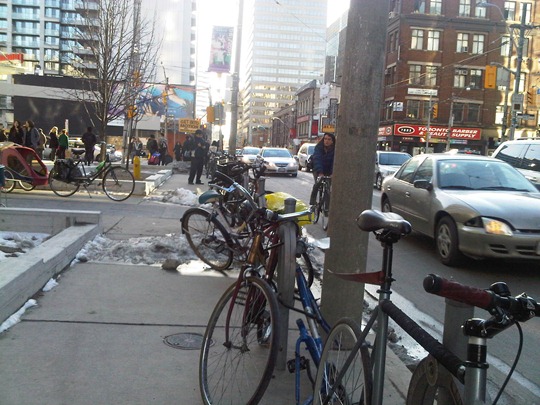 Despite Toronto lagging behind North American cities in building proper bicycle infrastructure, more than 34,000 bicyclists were counted entering and exiting the downtown core on a typical weekday last September.

The responses I received on Twitter from other North American bicyclists were very telling:

When bicyclists are avoiding a street because it is overly congested with bicycle traffic, you know we are doing something right. And the fact that we are seeing bicycle traffic jams in sub-zero weather is a great sign of what’s to come in 2011 for Toronto.