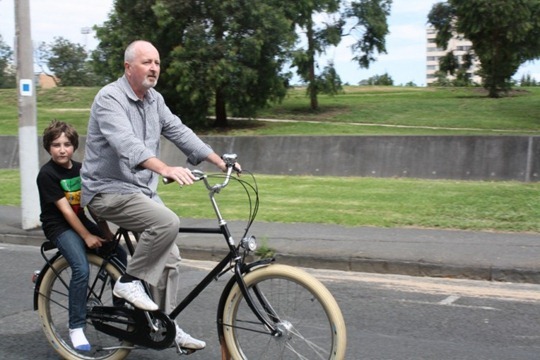 I didn’t have the luxury of growing up in a bicycle-friendly culture like they have in the Netherlands. I grew up in North America’s car-centric society, and although I used my bicycle as transportation prior to attaining my driver’s permit, I nonetheless grew up loving cars.

As a kid, I had always dreamed of owning a Jeep. The type of Jeep where the roof and the doors come off. So when I was a 3rd year student in 2001, I secured a decent job with a large Canadian bank, and decided to treat myself by buying a 1995 Jeep YJ.

I have come a long way since my young and immature SUV-driving days. I gradually made the switch from being car-dependent from 1996 to 2002, to being car-free in the city and using my bicycle as my primary mode of transportation.

1) Stop worrying so much about theft.

Do you own an expensive bike? Get a better lock. Still concerned? Then don’t spend so much on your bike. A bike is meant to be used and left outside. If you rarely use your bike because you fear it will be stolen, then you just aren’t living your life. Free yourself from that fear.

Being in a rush is contagious. Try to slow down a bit – going slower is also contagious. If you move too fast you will miss some great scenery, and you will have less time to react to obstacles. Sure, there are times when we’re late for a meeting, but most of the time we can all probably take it a bit slower.

3) Use a bike that is street clothes friendly

In 2002, when I first moved to Toronto, I wrapped my pant bottoms with reflective Velcro to keep my pants from getting caught in the chain. Sometimes I would lose the Velcro strap and have to roll my pants up. It was bloody annoying. Use a bike that you can hop on without having to roll or strap your pants. You will thank me later.

4) Use bicycles when you travel.

If you travel a lot for work or otherwise, try to use a bicycle. In 2008 I spent two months on a work assignment in Calgary, Alberta. I bought a used bike on Craigslist for $30 and probably saved $1000+ in taxi/rental car fees for my employer. Not only that, I had the freedom to go wherever I wanted to go, whenever I wanted to go there. Pretty much any time I travel for work, the bicycle plays an important role (except in ridiculous Las Vegas where I’m heading later today for a work conference).

5) Don’t trust drivers, but don’t fear them either.

I always assume a door on a parked car is going to swing open at any moment. So I give myself enough space so if/when the door swings open, I will be safe. Always assume drivers can’t see you, and take control. But don’t let yourself become fearful and stop riding out of fear. 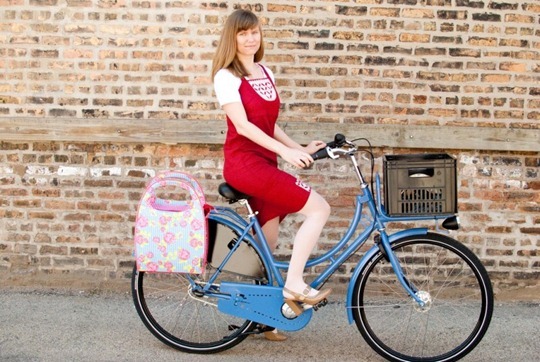 “Dottie on De Fietsfabriek Oma” – by Dream Dottie on RateMyVelo.com

6) Try to ride where other people ride.

The most dangerous street is a street where drivers aren’t expecting to see you. You are safest when you are surrounded by other bicyclists – even if that means your ride will take a bit longer. It’s often worth the extra time.

7) Minimize your gear and don’t check the weather

If your bike has fenders and a chain guard, there are few occasions where you should need to ride in anything other than the clothes you would wear if you were walking or driving. The less gear you have, the easier it will be to make the choice to ride. To avoid stressing out over weather forecasts that may turn out to be incorrect, I always carry something light to cover myself in case I do encounter rain.

(Note: in the original article, “never check the weather” was included as item #9. It has been collapsed into this point to make room for the new #9).

8) Store your bike in a convenient location.

If your bike is locked up in a basement storage locker, you are far less likely to use it for quick trips. Store your bike in a convenient location, even if that means locking it up outside to a tree. I keep my bike locked up on my ground-level front porch, so it’s convenient to hop on for even the shortest of trips.

One of the key tools I use to assist with car-free living is to use car sharing/rental services when the need periodically arises to use a car. An important difference between using car sharing services and owning your own car is that car-sharing services inherently provide an incentive to drive less. When you own a car, there is more incentive to drive it more often because you are paying for the car + insurance + depreciation regardless of whether you actually drive it or not.

(Thanks to a commenter for pointing this out. It wasn’t in the original article, but car sharing does in fact play an important role for me. The comment was subsequently lost by Blogger, but I hope Blogger will recover it).

Most bicyclists in car-centric societies have at one point or another been told by their friends or acquaintances that they are “crazy” or they have a “death wish”, and they are “risking their life”.

A colleague of mine is 6 months pregnant and has been chastised by her friends for continuing to ride her bike. Have you ever heard of a pregnant woman being chastised for being in an automobile on the highway? Not likely, yet they are likely putting their baby at a higher risk than my colleague.

These pragmatic, common sense tips will help make it easier to hop on a bicycle in a car-dominated world. Feel free to share your own tips in the comments. Everyone has their own perspective and suggestions to help avoid the plenty of barriers that block us from riding.