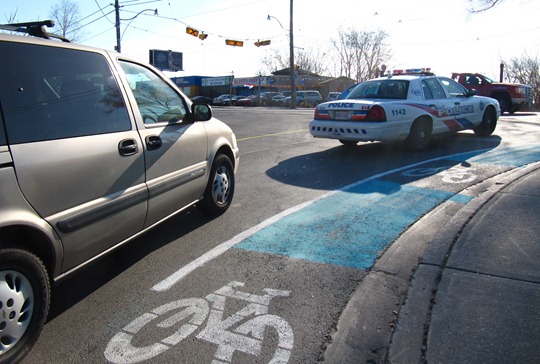 At approximately 10AM this morning, Toronto’s Guerrilla bicycling advocates – the Urban Repair Squad – re-painted the intersection at Dundas and Sterling, the location where cyclist Jenna Morrison was run over by a truck and killed last month.

Bike lanes were painted on both sides of the street, and the southbound vehicle lane was widened to give cyclists more space at the intersection.

A source involved with the re-painting told me the police showed up at the end and the team scrambled, leaving behind their materials. When I arrived on the scene at 11AM there were several police squad cars at the scene cleaning up.

The guerrilla group used water-based paint, so the intersection changes aren’t permanent, but the re-paint was done to make a point and to highlight how easy it is to make positive improvements in a city that is tearing out its bicycle infrastructure.

The source also said several cars passing by were honking and giving thumbs up to show their support. A fire truck showed up on the scene with the police, so the source thinks a motorist who didn’t appreciate the efforts made a call to the 911 emergency service.

At approximately 12:15PM a City of Toronto employee arrived on the scene. He told me he was called in to remove the paint immediately because the police were not happy about the unauthorized painting.

The city employee works in the transportation and roads division and is tasked with removing the bike lanes, even though his personal opinion is that the bike lanes are a positive improvement for this intersection.

“Personally, I have nothing against it. But the police weren’t happy about it so they called me in so I need to remove the paint or I will have my bosses breathing down my neck.”

In fact, the city worker ironically has personal ties to this intersection. His wife was a friend of Jenna Morrison, the 38-year-old pregnant mother who tragically died at the intersection on November 7th when a right-turning truck clipped her and ran her over.

Several drawings have been floating around recently about how this intersection can be re-designed to make drivers more aware of cyclists, including this drawing that I sketched out a week ago: 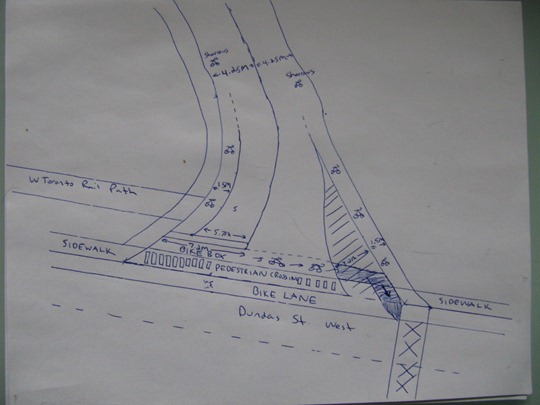 The Urban Repair Squad implemented some of the features that I had sketched in my proposed design. The designs will be peer reviewed and proposed to the City for them to officially improve this intersection. 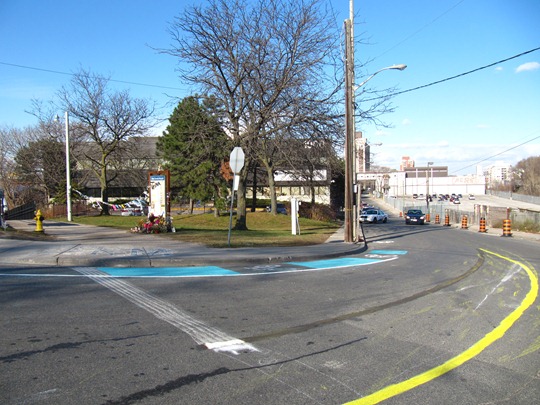 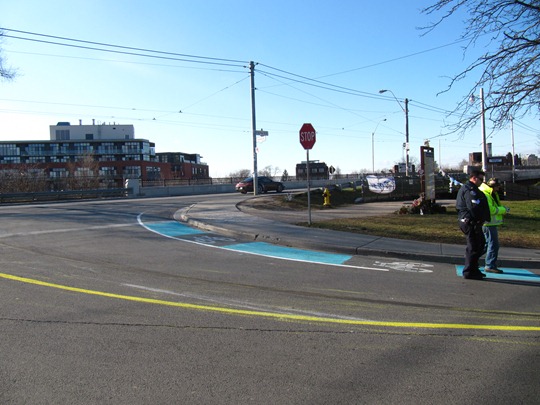 The Urban Repair Squad was featured on Treehugger in May for their DIY painting of the word “SLOW” on a Toronto road that can be hazardous for bicyclists and pedestrians to cross.

On the homepage for the anonymous Urban Repair Squad, it reads: “They say city is broke. We fix. No charge.”. Their mission is:

To encourage bicycling as an antidote to the poison that is car culture.

To actively construct a positive future of what urban transportation could be by installing it NOW.

To encourage citizens to reclaim ownership and stewardship of their urban space.

To employ the concept of Critical Mass; encouraging cyclists to bond together and more safely take back their rightful place on the public roadways.

Your city is broken. Don’t wait for the bureaucrats to fix it.

Given the glacial pace of positive change in Toronto, and the current administration’s removal of existing bicycle facilities, the Urban Repair Squad’s principles are ones that I can very much appreciate, and I would like to think that Jenna Morrison would also support their efforts.