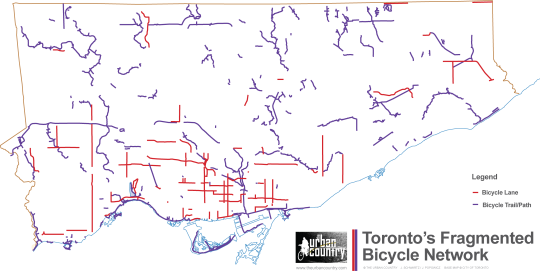 Toronto is not unlike the vast majority of cities in North America, UK, and Australia when it comes to bicycle infrastructure. Progressive politicians often aim high, but are often met with resistance by motorists and businesses when building bike infrastructure.

Populist politicians pretend they are doing something, but slap in just enough infrastructure just to get the vocal citizens to shut up, and regressive politicians do their best to unravel the small gains made by the progressives.

In 2001, the City of Toronto released its official Bike Plan which “established a vision for cycling in Toronto” and set out principles, objectives and recommendations to “shift gears towards a more bicycle friendly city”. The resulting patchwork of infrastructure is little bits and pieces of the bike plan being implemented over the years.

“Though the City of Toronto’s 2001 Bike Plan at that time was an important step in increasing on- and off-street cycling infrastructure, it was not bold enough in it’s vision for cycling in the city and its implementation to date has moved at a glacial pace.  According to the 2001 plan, the 1,000 kms of bikeways were to be completed by 2011.  As it stands, only 430 kms have been created.  Too often, bike lanes in Toronto don’t connect anything with anything.  We owe it to Torontonians to create and implement a network that connects places of origin with places of destination.”

In Toronto, we celebrate small gains one day and fight just to keep those small gains the next day. Motorists and politicians cry doom and gloom when improvements are proposed. They say traffic will become more chaotic and businesses will go under. Frankly, they will say whatever it takes to maintain the status quo.

But despite their catastrophic claims, traffic is minimally affected, and business actually benefit from bicycle infrastructure.

Kolb says the bike plan needs to go much farther:

“While the Bike Plan lays out a vision for a cycling network that is good in principle, the city needs to go much further by creating safer on-street bike lanes (protected bike lanes rather than painted bike lanes) and invest in the completion of our trailways.“

Toronto is indeed in the planning phases for its first physically separated bike lane downtown. This will better connect Toronto’s existing infrastructure if the motion passes through council.

Looking over at the Netherlands for inspiration, a quick look at a bicycle map of Rotterdam – the second largest city in the Netherlands – shows a network of connected bicycle infrastructure: 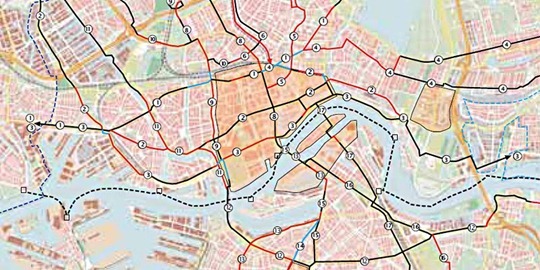 Image from “Rotterdam remedies a lower cycling rate” on A view from the cycle path. 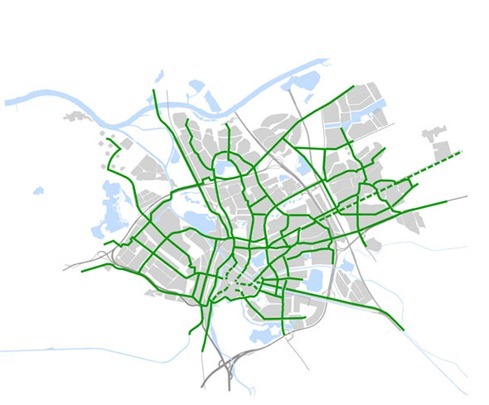 Image from “More developments in ‘s-Hertogenbosch and Rotterdam” on A view from the cycle path.

And here you can see a bicycle network in Assen Netherlands: 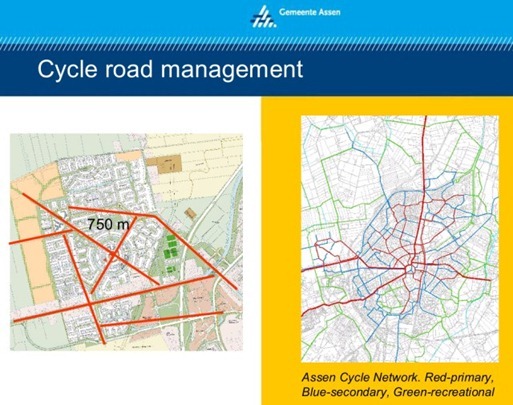 Image from “The Grid” on A view from the cycle path.

A connected grid of well designed bicycle infrastructure makes bicycling more comfortable for everyone. Thankfully, the lack of connected infrastructure in Toronto hasn’t stopped people from using their bicycles – for a strong contingent of bicyclists is politically vital in order to make positive, effective improvements in our cities.

So don’t wait around for the world to change. Do your part to change it yourself.

Whether you live in Toronto or elsewhere, here are a few things you can do to create positive change in your city: