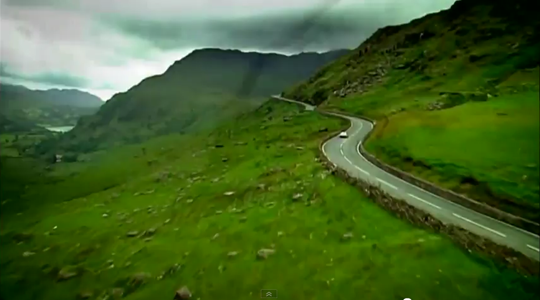 In a recent comment on a Grist article, I was accused of being “jealous” of a proud owner of a Ford Mustang with a 5.0 liter V8 engine with over 400-HP Ford Mustang (labeled as a “penile extension” by another commenter).

“the fact that you believe owning a Ford Mustang could induce jealousy in anyone, let alone me, is in fact quite amusing”.

Which led to the recollection of a fascinating film production in the closing season of a television show I have never heard of called “Top Gear”.

The poppy flowers, the birds chirping, the sparkling water wallowing around the rock; this video was produced to imbue fervor, sadness and an unyielding sense of being at one with nature, making the viewer feel a natural attachment with the V12, 500HP Aston Martin highlighted in the film.

The film serves to surface an emotional attachment to the automobile by exploiting our inherent human attachment to nature and converging that natural human affliction with a man-made motor vehicle that, frankly, is quite the opposite of nature itself.

Narrated by the driver of the Aston Martin in a soothing British accent:

Well, it’s an Aston Martin Vantage with a V12 engine. So what do you think it’s going to be like?

What it makes me feel like, is sad. I just can’t help thinking that thanks to all sorts of things, the environment, the economy, problems in the Middle East, the relentless war on speed – cars like this will soon be consigned to the history books.

I just have this horrible, dreadful feeling that what I am driving here… is an ending.

This film can bring out emotions in someone who has no attachment to motor vehicles. That is the point. That is how people become so emotionally attached to the hunks of steel that sit in their garage in our car dependent society.

Perhaps I am jealous after all. Jealous that our car culture can pull together 62 people (I counted, twice) to create this 4 minute and 50 second film to inspire you and formulate these emotions in you. This was a calculated and measured manipulation of your mind that indeed does make me jealous.

31 thoughts on “Emotional Affection For Automobiles”