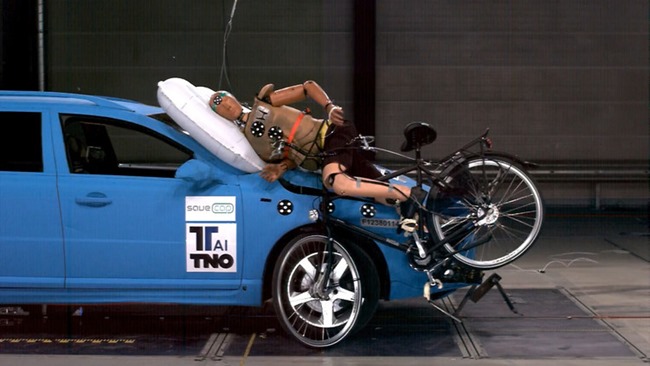 There has been talk for several years now about putting airbags on the exterior of automobiles to protect pedestrians and bicyclists if they get hit. The idea originated in the Netherlands and was lauded by our friend Mikael at Copenhagenize back in 2010.

So, in an inspired moment of rationality, they decided to put forth the idea of putting air bags on the machines that cause the damage – the cars. No ignoring the bull here. Place the responsibility where it belongs.

The crash test in the film is one of a series to determine where cyclists land on cars in order to figure out where the airbags should be placed. The next step is the completion of a detection system for pedestrians and cyclists. Then there is a test on the streets of Amsterdam.

“Thanks to this detection system, an airbag will be activated in the event of a collision so as to considerably cushion the impact of a cyclist’s head on the windscreen. The cyclist will not die from his injuries, and will have a good chance of coming out virtually unscathed.”

The idea of external airbags surfaced again yesterday in a post on Grist.

In a car-cycle crash, no matter whose fault it was originally, the cyclist is worse off, since her relatively unprotected body is now flying at a high speed towards the road or the car itself. But a Dutch company has come up with a partial solution to this problem, which, semi-miraculously, does not require the cyclists to carry yet another piece of safety equipment.

It is certainly refreshing to see a safety measure that isn’t all about the driver inside the car, but benefits people outside the car (you know, the more vulnerable road users).

But this type of solution doesn’t prevent collisions. In the past, safety equipment on cars has only created a sense of security that has prompted drivers to push harder, drive faster and become less cautious.

It remains to be seen whether external airbags will indeed increase safety for the most vulnerable road users: pedestrians and bicyclists. The crash test photos are a sign that they are testing out the technology and tweaking it to get the desired result.

However, there is still one piece of safety equipment that doesn’t require crash tests, but would most definitely increase safety for vulnerable road users. If I recall correctly this one was put forth by our friend Todd a few years back (paraphrased from memory):

The best way to increase safety for pedestrians and bicyclists is to remove seatbelts from cars and put metal spikes on the steering wheel facing the driver. This will guarantee that drivers will be more cautious while driving.

Now that is a safety measure that I could support (though I’m not sure I could ever drive a car again).

Do you think external airbags offer the potential to improve safety for vulnerable road users? Please leave a comment and let us know your thoughts.

James D. Schwartz is a Technology Consultant based in Toronto, Canada and Editor of The Urban Country. You can contact James at james.schwartz@theurbancountry.com or follow him on Twitter.