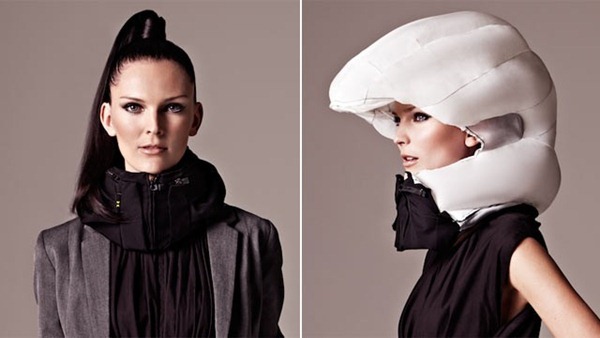 The Invisible Helmet – Photo from hovding.com

For several months now, the “Invisible Helmet” video has been making the rounds. It has been forwarded to me several times and hailed by some friends as “brilliant” and “ingenious”.

I have been asked several times what I think of the idea. Sometimes when I am asked certain questions, I preface my answers with “I’m not sure you are going to like what you hear; are you sure you want me to answer your question?”

Well this is again one of these cases where those who are hailing the invisible helmet as the best invention of the 21st century aren’t going to like what I have to say.

First, a little bit about the invisible bike helmet (also known as the “HOVDING”). As the name alludes, it doesn’t look like a helmet at all. It wraps around your neck, almost like a thick scarf, and when your head rotates in an abnormal way, the sensors on the device trigger an airbag to open around your head in just 0.1 seconds. It is basically an airbag for your head.

I will first start out by saying that I think the technology in the invisible helmet is nothing short of amazing. It took almost a decade of research by its Swedish inventors to develop and test this device. Preparing it to ship to market is distinctly impressive.

My issue with the helmet is in the marketing. The Hovding uses fear-based marketing to target an already relatively safe activity. The promotional video for the invisible helmet shows a cyclist getting hit from behind by a car over and over again.

Whichever conclusion I come to, there really aren’t any winners. If I buy the helmet, I’m going to be out $600 and still fearful for the rest of my body that is apparently inevitably going to be crushed by a car at one point or another.

If the makers of this helmet had targeted other relatively safe activities other than urban bicycling, it would be easier for me to support the product. If the marketing video had shown a pedestrian being hit by a turning car at an intersection, or if it had shown a driver in a collision on a highway, then I would feel differently about the product.

But the makers decided to target bicycling, making it appear dangerous in order to sell these helmets.

Perhaps instead of targeting bicyclists, they could have targeted skiers and snowboarders. Surely the invisible helmet would be much more beneficial for a skier or a snowboarder than a slow-pedaling urban bicyclist.

The truth is, urban bicycling is an already relatively safe thing to do – especially in places where there is great bicycle infrastructure.

If recent trends are any indication of what the future holds, we are moving in the right direction to make bicycling even safer here in North America. Even cities in Europe that weren’t bike-friendly are transforming themselves; Paris is a prime example.

If spending $600 on this helmet makes people feel safer on a bicycle, then I am fully supportive of their decision to buy this helmet.

But the video that promotes this helmet does not at all give me the “warm and fuzzies” about bicycling.

If we resign ourselves into believing that being hit by a car is an inevitability, then I think we have bigger issues than just protecting our heads with a $600 helmet.