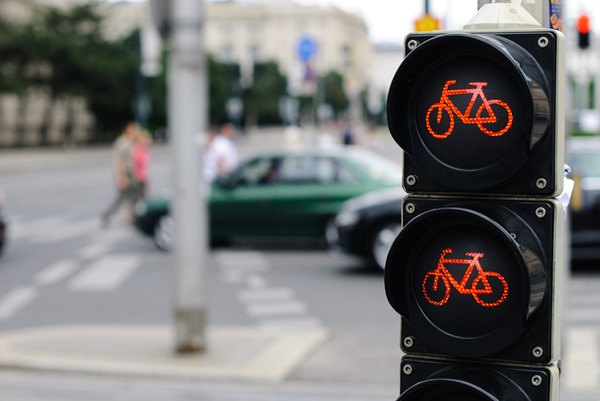 In Copenhagen, traffic signals along “green wave” routes are timed to provide a constant flow of green lights to bicycles traveling at 20km/hour. Bicyclists who ride at this speed will never hit a red light all the way to the city centre.

In the Netherlands, “green wave” routes are provided for bicyclists traveling between 15 to 18km/hour. Outside of green wave routes, traffic signals often give priority to bicyclists over cars, allowing bicyclists to wait the minimal amount of time for a light to turn green.

These initiatives are just a couple examples of pragmatic solutions in bicycle-friendly cities that ease traffic congestion by providing significant incentives for people to choose bicycle transport over driving. Copenhagen’s main bicycle route facilitates more than 30,000 bicyclists each day.

But these initiatives have an obvious side benefit too: they help encourage good behaviour by creating disincentives to break the law.

Bicyclists in Copenhagen who may otherwise ride faster are encouraged to slow down to 20km/hour in order to ride the “green wave”. Furthermore, a bicyclist is less likely to run a red light if she knows that the traffic signal will change within a reasonable amount of time.

Here in North America, amidst our car culture, we see the opposite happen. Traffic laws and infrastructure designed for motor vehicles unfortunately creates incentives for bicyclists to break the law, resulting in bicyclists being cast in a negative light as “scofflaw” cyclists.

Case in point: While in New York City last weekend, I used Citi Bike as my primary mode of transportation. Read my review of Citi Bike here.

While the protected bike lanes were wonderful and comfortable, the traffic signal design, which was designed for motor vehicles, made it awfully tempting to break the law and run red lights.

For example, while riding down the 9th Ave protected bike lane at a relatively slow pace, we hit red lights at almost every intersection.

Obeying the law would put bicycling on par with walking pace, since a bicyclist would need to wait for a full 3-phase signal cycle to complete at almost every block.

Thus, it was no surprise to me that most bicyclists safely passed through a red light when the intersection was clear.

Other bicyclists rode fast enough that they could hit most green lights, which are timed for motor vehicles traveling at about 50 km/hour.

In the eyes of onlookers, red light jumpers are “scofflaw” cyclists. But it is bad design that creates incentives for bicyclists to jump red lights.

Even as a tourist  in New York, I surely wasn’t going to sit at red lights all the way down 9th avenue, so I safely and courteously jumped my fair share of reds over the weekend.

This is an example of how road infrastructure that was designed primarily for motor vehicles can make bicycling uncomfortable, unsafe, or inconvenient. This pushes people away from using bicycles and result in more cars and traffic congestion on our streets.

More people on bicycles means we can move more people throughout our cities at a lower cost.

Initiatives that provide incentives to choosing bicycle transportation over cars will help achieve this goal.