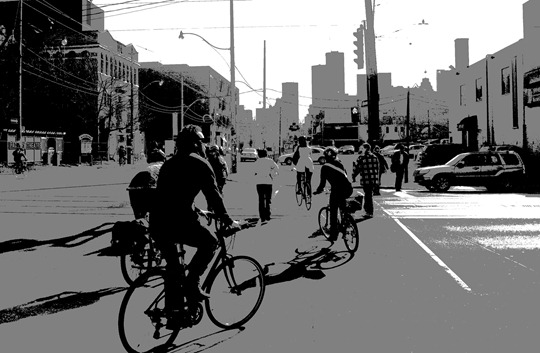 A few days ago I was propositioned by a sales rep for an online retailer to promote their cycling clothes. Such E-mails are very common when you run a website, and 99% of the time I simply ignore them.

This time however, I felt the contents of the website would generate some interesting dialogue. The online retailer is called “sharethedamnroad.com” and they sell “cycling jerseys that make a difference”. 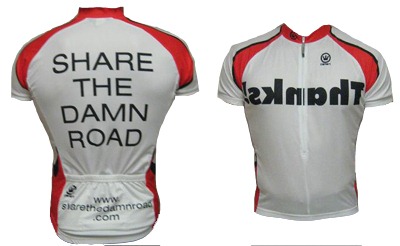 Make a difference indeed. First of all I wouldn’t be caught dead wearing skin-tight lycra clothing on my bike. Even when I competed in a triathlon this summer I wore my kayaking clothes rather than the typical cycle racing gear. I was obviously there for fun rather than to win. 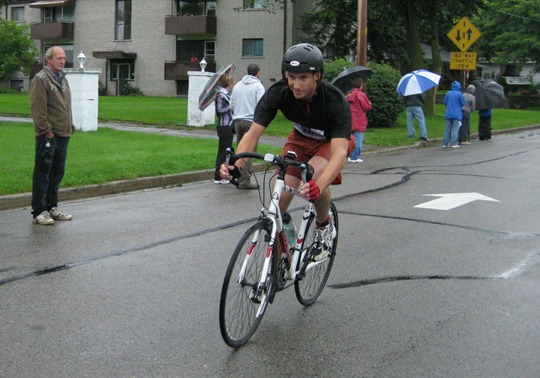 Secondly, these clothes are certain to piss off some drivers. There is already enough tension here in Toronto where it is common for drivers to feel that they own the road and have no obligation to share it with cyclists.

Wearing a shirt that reads “share the damn road” is not going to earn you any respect from drivers – even with the futile “thanks” written on the front of the shirt intended for drivers to see through their rear view mirror.

The Toronto Cyclists Union, a membership-based cycling advocacy group here in Toronto took a different approach. They started the “Cyclists Paving the Way” campaign in October to pass out thank you cards to drivers who “made a point of treating you with respect in traffic”. 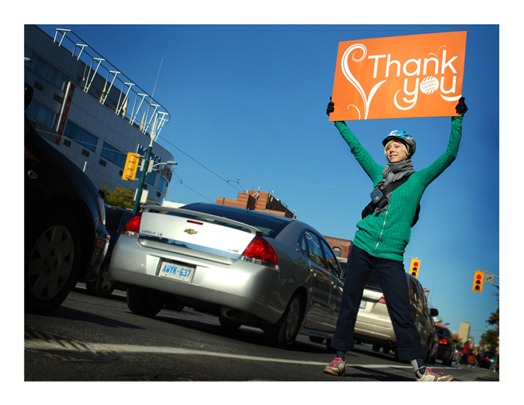 The media attention this campaign received was probably more effective than the impracticality of handing out thank you cards to drivers. I am more pragmatic, so waving to a driver who makes a conscious effort to respect my safety serves the same purpose.

Which leads me to a topic that has been on the forefront of my mind as of late – the effect that your cycling style has on a driver’s tendency to have animosity toward you.

Since I moved to Toronto in 2002, I have commuted on different styles of bicycles while observing the behaviour of drivers as a result of each cycling style.

It is perhaps no surprise that cycling on a sit-up-style bicycle, moving at a slow, relaxed pace tends to have a contagious, tranquil effect on drivers and other cyclists alike.

This style of cycling is far more common in Europe than here in North America, but the last few years in Toronto have seen vintage cruiser-style bicycles become immensely popular. 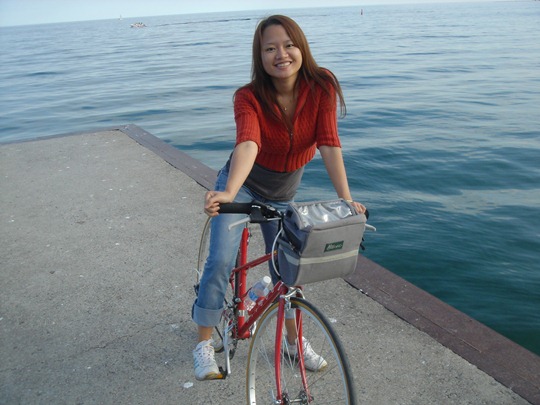 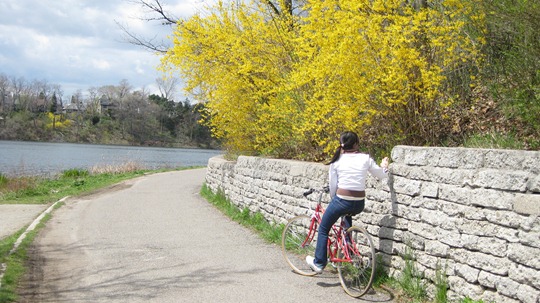 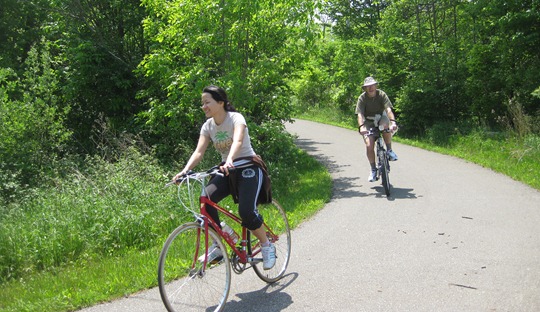 Above photos by James D. Schwartz / The Urban Country

How could any driver in their right mind be hostile toward somebody on such a relaxing, sit-up bicycle that you see my fiancé Han riding in the photos above?

My friend Michael Rubbo – the Australian filmmaker – coined the term “situp cycle” on his website www.situp-cycle.com. Mr. Rubbo is fascinated by the European sit-up cycle culture that eludes Australia with its hunched over, racing culture.

I went through a phase of riding a hunched over racing bike in Toronto, and I found it only contributes to the tensions and the “rat race” feeling, rather than allowing you to enjoy your ride.

After visiting Washington DC in September and renting a comfortable sit-up hybrid commuter bike, I knew it was time to get a more practical commuter bike in Toronto. Storage space in my condo building is limited, so I would have to resign to storing my bike inside my unit.

Since I bought my Trek Navigator commuter bike in October I have ridden it every day – noticing the calming effect it has on drivers. It is also more enjoyable, comfortable and safer.

When cyclists scurry, it makes automobile drivers think they need to speed up as well. “Why should that cyclist get where he is going faster than me? I pay for these damn roads”. (Which of course we know is not true – cyclists pay for the roads too).

Bicycle sharing systems (such as BIXI) may also have a calming effect on downtown traffic. BIXI launched in May 2009 in Montreal and is slated to launch in other cities in 2010 (including Toronto).

The BIXI bicycles provide the same European style sit-up cycling that can slow down our bustling cities, having a calming effect on drivers to help our roads become safer for everyone.

In the coming weeks I will be heading to Montreal to meet with some BIXI representatives to find out how successful BIXI was in its inaugural year.

It’s important for all of us to take a deep breath and slow down a bit – drivers, cyclists and pedestrians alike. Life is more enjoyable when you actually take the time to enjoy it.

16 thoughts on “The Sit-Up Cycling Revolution”