Bicycle-friendly workplaces can help overcome a major barrier to commuter cycling. Although I didn’t list “bicycle unfriendly workplaces” as one of the major barriers to cycling in a recent article, it can be extremely discouraging if a place of business doesn’t provide at minimum, a safe place to lock up your bicycle.

Businesses have begun to recognize that supporting commuter cycling can benefit their business. In the Netherlands, a recent study concluded that a 1% increase in cycling to work can save 27 million Euros in lost productivity and improve health among employees.

Many businesses in the Netherlands pay their employees on a per-km basis to ride their bike to work, while others use a point system where workers can save their points and purchase products. Company bicycles are also provided by some Dutch employers to encourage cycling.

BikePortland.org has a good list of bicycle-friendly businesses in that cycle-friendly US city and Copenhagen has also done a great job of encouraging people to ride their bike to work.

The consulting company that employs me – imason inc. – is an example of a bicycle-friendly workplace, and I felt compelled to highlight my workplace in the promo video above. imason allows employees to bring their bicycles directly into the 8th floor office, storing them at the back of the office, while also providing shower facilities for those who feel compelled to shower after cycling in to work. 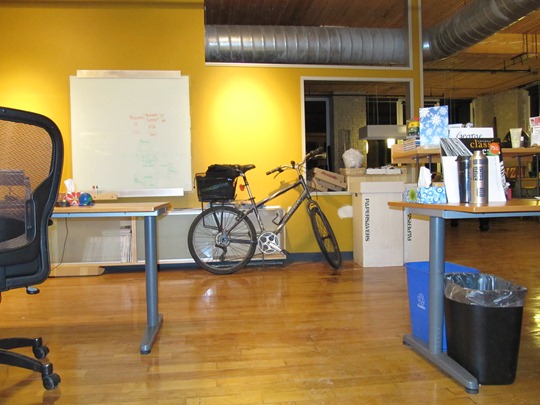 In my experience, few offices let their employees ride laps around the office as I did to make this video. Truth be told, I didn’t actually ask for their permission – but I am confident they will be supportive of my fun little initiative.

Sadly, the only “corporate” office that received recognition in last year’s Bicycle Friendly Business Awards was “Quadrangle Architects Limited” – awarded with the “Bicycle Commute Award”. The other awards were handed to businesses whose primary business is bicycles (with the exception of the two awards given to Ryerson University).

Two-time winners of the Bicycle Commuter award, Quadrangle Architects Limited is a proud bicycle friendly business with a very strong cycling culture. The employees enjoy a cyclist-friendly dress code, secure indoor bike parking, shower and change facilities, and access to bike repair items such as tools, oil and a tire pump. Cycling events are promoted in the workplace and employees participate in Bike Month and community cycling events

Businesses have a great amount of influence to improve commuter cycling. Their small actions can translate into very large improvements in the cycling commuter mode share, while businesses who are unsupportive toward commuter cycling are only adding to an already long list of barriers that people encounter when they consider cycling as an option to commute.

Video by James D. Schwartz / The Urban Country (with special thanks to Michael Rubbo for mentorship), music by www.danosongs.com