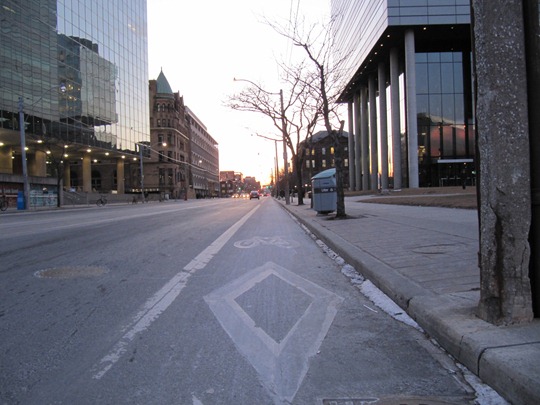 This week the beautiful spring weather brought along with it some relatively happy news for cycling advocates in slow-moving Toronto. BIXI bike sharing has being revived, and our first segregated bike lanes will operate on a pilot program this summer on University Avenue. But not everyone is happy about installing more bike lanes.

In February – along with iBikeTO.ca – we revealed that Toronto’s imminent BIXI bike sharing program had been been jeopardized. Disappointed by this news, we partnered up with other cycling advocates in the city – with leadership from the Toronto Cyclists Union – to urge citizens to put pressure on their local Councillors and revive the prospect of bike sharing in Toronto.

Our voices were heard, councillors felt the pressure, and City Hall staff pulled its magic strings to get BIXI back on the table to be implemented by May 2011 – one year later than its original planned launch date.

Although positive news, it is still somewhat disappointing because the most important criterion for bike sharing to succeed is convenience. If there aren’t enough bike stations conveniently located around the city, people won’t use them.

With only 1,000 bikes at 80 stations, the city needs to be very cautious not to cover too large a radius, which could result in less convenience for users to pick up a bike and efficiently return it close to their destination.

One of the reasons for Montreal’s success with its BIXI program is that it launched with 3,000 bicycles across a relatively small downtown radius. The success in Montreal saw its program expand within months to 5,000 bicycles at a total of 400 stations.

We can only hope that the Toronto program will see similar success and expand to improve the coverage area and convenience for its users.

The second positive headline to hit the streets on Tuesday was the news that Toronto will implement a pilot program from July to September whereby protected bicycle lanes will be installed on University Avenue from Richmond Street to Wellesley Street.

Photo courtesy of City of Toronto

These protected lanes would turn the 8-lane University Ave. into 6-lanes and provide a protected buffer between automobiles and cyclists – a first for a Toronto bike lane.

Without these protected traffic signals, cyclists may feel they are protected from motorist conflict, but in reality they may be more vulnerable to being left-hooked by turning cars.

Not Everyone happy about more bike lanes

Unfortunately, not everyone is as excited about these bike lanes as most of us are – The Toronto Star’s Bob Hepburn says Bike lanes on University Ave. make no sense.

In the article, Mr. Hepburn notes that he only saw 15 cyclists Wednesday morning on his way to work while driving down Sherbourne Ave. He then goes on to contradict himself by saying: “While more bike lanes are a good idea, putting them on major roads is ridiculous. They should be placed on less-busy routes.”.

First he points out that there were very few cyclists on Sherbourne Ave as building a case AGAINST bike lanes. Then he says he SUPPORT bike lanes, but only on less busy routes.

Had Mr. Hepburn driven down College St. or Queen St, he would have seen far more than 15 cyclists.

Cyclists use main arterial roads for the same reason drivers do – they are more direct, they are faster, and they are lined with stores and office buildings where cyclists and drivers live, shop and work.

Another article in the Toronto Star by Gil Penelosa claims these bike lanes “connect nothing to nothing”.

Penelosa is wrong in his assertion – bike lanes on University Ave. connect with the Hoskin Ave, Wellesley St in the north, College St and Gerard street near the middle, and although Queen street is bike-lane-less, thousands of cyclists use it nonetheless.

In the south, the city is planning to convert Richmond and Adelaide streets into two-way streets and eventually adding a bike lane on one or both of these streets, so this will eventually connect the south end of the University bike lanes to an east-west bike lane, while nearby Simcoe street has a bike lane that leads south to the lake.

Ironically, Penelosa works as a Senior Consultant for the Danish firm Gehl Architects. You may be aware that Gehl Architects is headed by the infamous Jan Gehl, the visionary and architect of Copenhagen’s pedestrian and cycling infrastructure.

Penelosa should know that Copenhagen’s bike infrastructure wasn’t built overnight. It took 30 years to get where they are now – and they are still improving the network.

Toronto is inching forward at a pace we haven’t seen in the 9 years since the city’s bike plan was first written – so let’s keep the momentum going.

We may be 30 years behind Copenhagen, but we have to start somewhere.