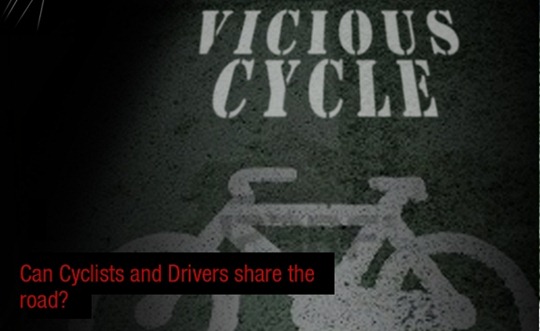 Earlier this week, I was invited to participate in the filming of an MTV News’ Impact television special called “Vicious Cycle” – which asked whether Cyclists and Drivers can share the road.

I was in the audience along with the former Director of Communications & Events and Founding Executive Director of the Toronto Cyclists Union – Yvonne Bambrick.

Although the title of the show is controversial and could be interpreted as perpetuating negativity towards bicyclists, the discussion between the audience and the panel was mostly constructive and hopefully a positive exercise to show drivers the bicyclist perspective, and to show bicyclists the driver’s perspective.

After listening to several panellists talk about how nothing will ever improve in Toronto because we can’t afford proper bicycle infrastructure, or because it will cause too much congestion for motorists, I had to bite my tongue.

Proper bike infrastructure costs only a fraction of what automobile infrastructure or public transportation costs to build – and it takes very little space. The world didn’t end when they took a very small amount of space away from motorists in New York to share the public space with bicyclists.

As a result, the number of bicyclists in New York has been increasing each year – relieving congestion on the streets and easing the burden on the subway system.

Proper bicycle infrastructure and traffic signals also helps to make bicyclists more predictable in busy traffic – reducing the opportunities for conflict. Thus it not only helps to get more people using bicycles, it helps to ease the tension between road users.

MTV News Impact’s “Vicious Cycle” will air Sunday November 21st at 6PM EST and again at 8:30PM. It will also be posted online on the MTV website.