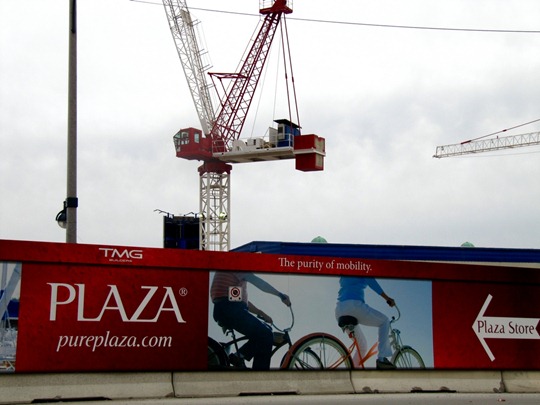 Despite everything that has happened with the economy and real estate market  with our neighbours in the United States, Toronto has continued developing new condominiums across the city without pause. Everywhere you look, you can find construction cranes in Toronto – it’s actually a bit scary.

Canadians have a false belief that they are somehow shielded from experiencing any economic pain, and I talk to a lot of people who strongly believe that Toronto’s real estate market will always rise.

It’s also common for us Canadians to think our banks are more conservative, and that we don’t borrow nearly as much as those consumerist-fiends south of the border. This is of course a myth – but whatever helps people sleep at night.

In a city like Toronto – where most people still own automobiles – it really says something about our shifting society when new real estate development sites are featuring bicycles to sell homes.

I came across this phrase on a new development site in my neighbourhood:

“The purity of mobility” 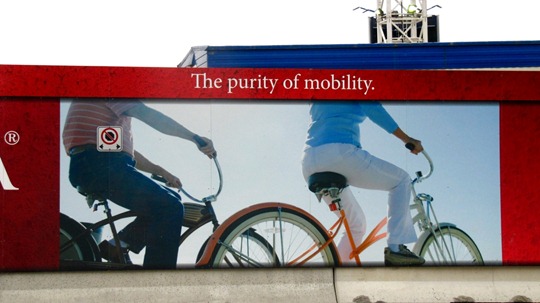 A few blocks away, another new condo development site features a fresh painting of a woman on a beach cruiser with a basket doing her groceries. 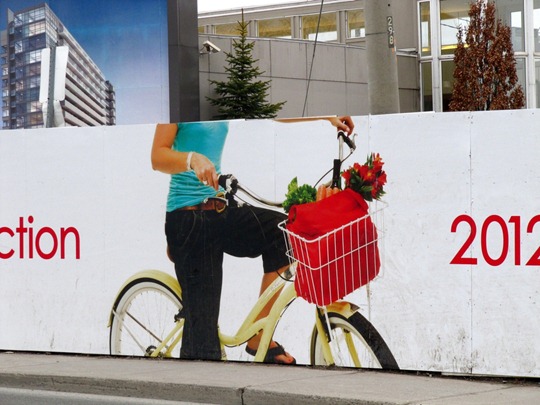 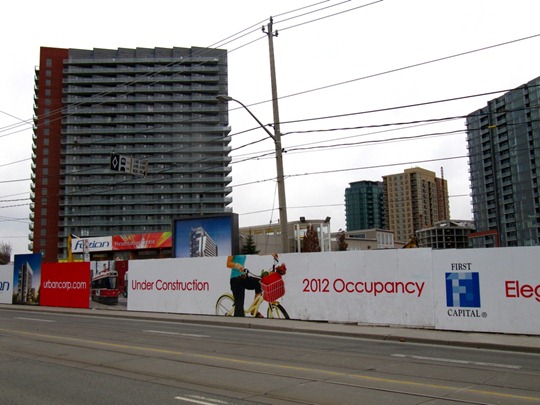 Unfortunately, when you look at the artist’s rendition of this same building, it is sadly lacking bicycles. I can count at least 12 people in this photo, 4 automobiles and one streetcar. But not a single bicycle – not even on the terraces where some bicycles will no doubt end up. 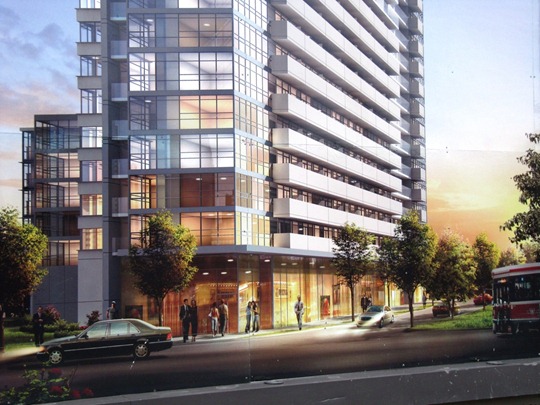 A couple blocks away yet is another new development site – this time a commercial building. This is of course the most bleak rendition of a new building that I could find – prominently featuring a parking lot with pedestrians who look like they are lost – searching for their cars.

You couldn’t apply the phrase “the purity of mobility” to this rendition. “The impurity of mediocrity” would more aptly describe it. 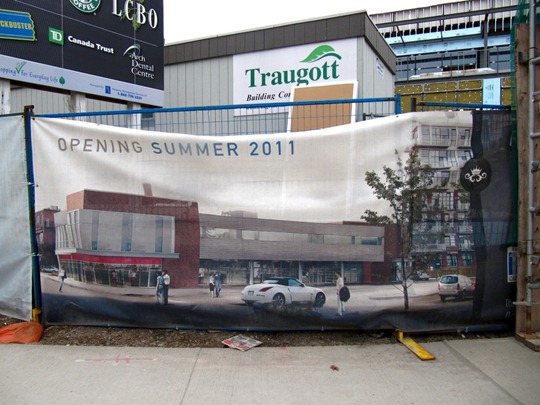 But that isn’t the case here – bicycles are everywhere in this city. Where we are lagging behind the world in bicycle infrastructure, we make up for in bicycle culture. We have a fairly strong contingent of more than 34,000 bicyclists who enter and exit the core downtown area on an average day in the fall season.

And although most people might not ride bicycles for transportation, most inhabitants of Toronto own a bicycle – and a good number of them ride for recreation.

This new building was completed just days ago and already has a bicycle locked up on the front stairway: 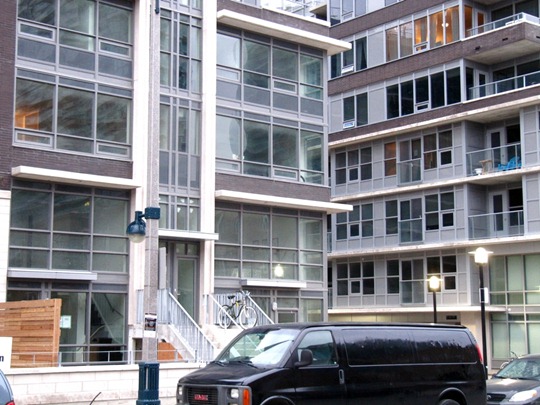 The several bike racks at this townhouse complex are usually full: 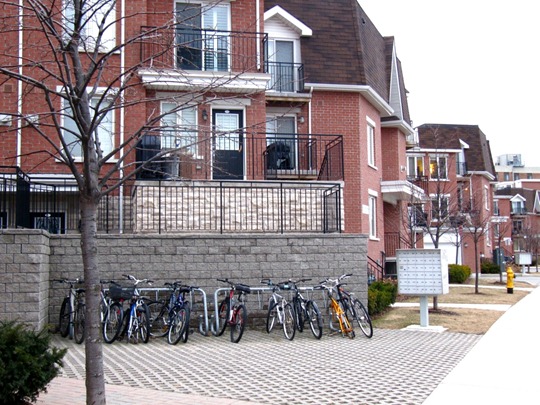 And where there are no racks, people will find a pole to lock their bikes: 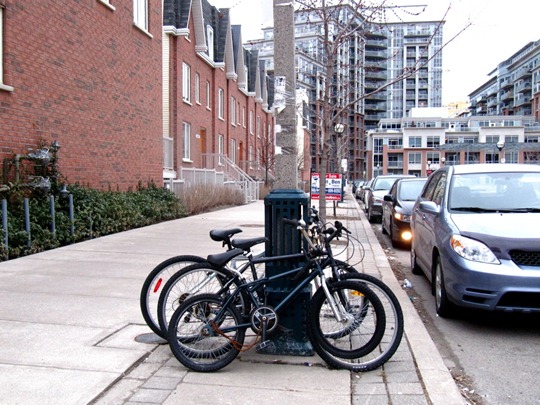 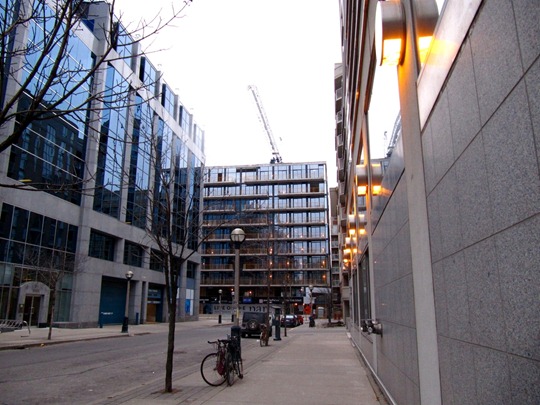 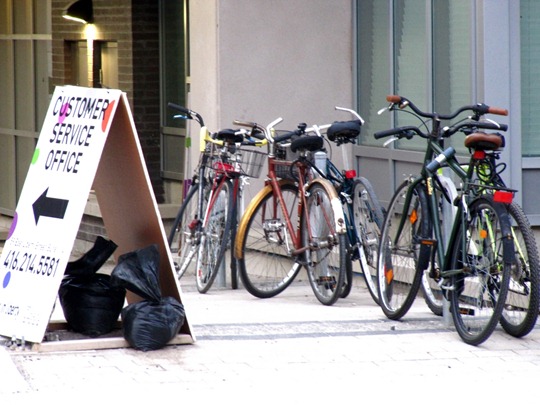 Selling real estate isn’t the only market where bicycles are being used either: clothing stores across the city are decorated with stylish retro bicycles to sell clothes and fashion. Plenty of new bike shops are opening up all over the city too.

All signs are pointing toward the fact that bicycles are becoming mainstream – even in some car-dominated North American cities.

You may choose to embrace it (or not) – but you will find it very difficult to ignore it.