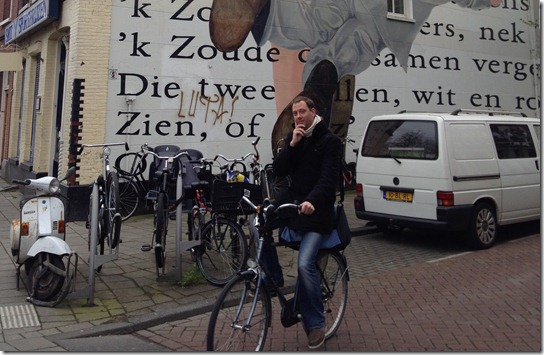 There is something about bicycling in Amsterdam. Visitors who would never consider bicycling around their home cities often feel compelled to explore Amsterdam by bike simply because they see other people just like themselves pedalling around the city, at ease, in regular clothes.

Just like the restaurant with the long line-up out front, or the woman who waits at the traffic light until she sees another citizen crossing before she proceeds against the traffic signal, humans are social beings and we often crave acceptance from others before choosing to do something in the public eye.

People generally don’t want to be viewed as outcasts, and bicycling in Amsterdam is an inclusive activity that people feel comfortable enough to participate in.

Meet Dirk Eys. Dirk is a Canadian ex patriot who has lived in Amsterdam for the past four years working as a stock trader for a Dutch firm. Back home in Canada, Dirk had never considered using a bicycle to get around – nor had most of his friends back in Canada. 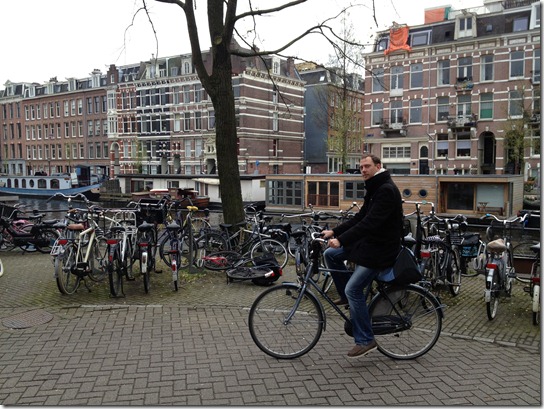 When asked why, Dirk responded:

“I had never considered it. I thought the roads in Toronto were unsafe.”

Dirk viewed urban cycling back in Canada as “crazy” and found it difficult to imagine himself using a bicycle to get around the city.

Three months after moving to Amsterdam, Dirk discovered the joy and convenience of bicycle transportation and he hasn’t looked back since – despite the half-joking ridicule he has endured from his friends back home about becoming a “hippie cyclist”.

I met Dirk while I was visiting Amsterdam last month. Dirk is friends and colleagues with two friends of mine from Toronto whom also live in Amsterdam.

On one sunny Saturday afternoon, a group of five of us, including Dirk, rode our bicycles a bar together to have a few drinks. Seeing a group of five people riding their bicycles to and from a pub is a rare sight in Canada outside of bicycle advocacy group drinks and younger hipsters.

But in Amsterdam it is quite common for people of all walks of life, and not considered strange in the least. People will ride to a bar, a restaurant, a store, or to a friend’s house, or wherever they need to go. They dress for their destination and hop on their bikes and go.

They don’t need to carry around a helmet when they reach there destination, because nobody wears helmets there, and the bicycles are designed to prevent your clothes from getting dirty or causing you to sweat.

I was intrigued by Dirk’s conversion to using a bicycle for his daily transportation. When Dirk first arrived in Amsterdam, he had thought cycling was unsafe in Amsterdam as well – perhaps bringing the perception he acquired in Canada along with him:

“For my first three months in Amsterdam – before I had started riding a bicycle – from what I had witnessed with bikes and cars in Amsterdam I had also thought bicycling in Amsterdam was also unsafe.”

We have talked extensively on this blog in the past about how the risk of bicycling are overestimated in North America, while the risks of driving are underestimated. Most people fear riding a bicycle in North America, but won’t think twice about driving a car at high speeds on the highway.

To illustrate how our risk perception does not match reality, a recent article in the Toronto Star on roller coasters highlighted that you are 100 times more likely to be killed in your car on the way to the amusement park than to perish on a roller coaster.

Security expert Bruce Schneier has talked extensively on the topic of how our feeling and reality have diverged. Schneier argues that technology and media make it harder for our feelings to match reality, and companies and governments play on society’s feeling which creates irrational fears (paranoia). More on this topic in a future article.

When asked what he thought of people who used bicycles for transportation in North America prior to moving to Amsterdam, Dirk told me:

“Truly I just thought they were crazy riding on the roads. I always heard stories from friends that they were getting hit by cars, they had fallen from there bike, had accidents, etc.

I now see that it makes perfect sense. It vastly improves the quality of life.”

And what do Dirk’s friends back in Canada think when he tells them he uses a bicycle to get around?

“At first they joked that I had turned into a hippie, but now they think it’s great because if they know that I’m riding a bike, it must be something fantastic, because i was never the type to use a bike as a means of transportation.”

In addition to the freedom and convenience of using a bicycle to get around Amsterdam, Dirk can’t deny that he enjoys the fact that it costs hardly anything, is environmentally friendly, and helps him lose his “beer gut”.

I asked Dirk if he thinks cities in Canada could become more like Amsterdam with respect to bicycle transportation.

“I don’t think in the near future, because biking is a culture that is intertwined the Dutch lifestyle. North America would have to be fully committed to change the whole transportation infrastructure and this is not an easy task.”

You’re telling us Dirk. We are certainly trying hard on this blog to change people’s perceptions and sell the benefits of better, connected, bicycle infrastructure, but it is certainly no easy task.

I then asked Dirk what he thinks can be done to make it easier to get around by bike back in Canada:

“Simple, designated bike lanes would help make it more convenient and safe to get around by bicycle. Motorist testing should also be designed to include safety training and education about sharing the road with cyclists.”

It’s hard to argue with that. The bike infrastructure in Amsterdam helps make bicycling more comfortable than having to compete with cars for space as we do in North America.

When Dirk one day returns to Canada, he told me he plans to continue using his bicycle as his primary mode of transportation and has no plans to buy a car. Thank you Amsterdam for helping to keep one more car off Canada’s streets.

Now if only more Canadians would go to Amsterdam to be “converted” like Dirk was, we might be able to achieve the critical mass that we will need to expedite building proper bike infrastructure to make cycling safe, convenient and enjoyable.