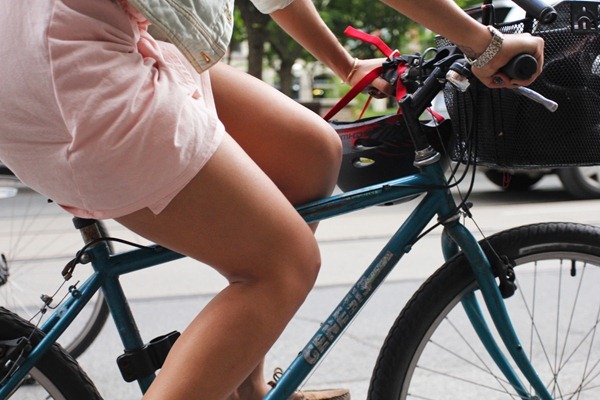 While pedaling to a client’s office one morning in May I witnessed a driver hurriedly squeeze past a cyclist ahead of me, missing the cyclist by mere centimetres. The woman on the bicycle shook her head but kept riding on.

I pulled up beside the car at the next intersection and asked the woman behind the wheel if she knew that she almost hit the lady on the bicycle:

This incident came on the heels of my return from a four-month stay in China where I didn’t experience a single incident while riding my bike each day. The tension and road rage I was seeing on the streets of Toronto was oddly making me homesick for China.

After arriving at my client’s office that day I noticed one of the employees, Carla, had also pedaled to the office that morning. I decided to share my story with Carla and I asked her about her commute. Carla told me that she has a pretty smooth commute to the office, and she rarely encountered situations like I had witnessed.

Carla’s feedback illustrates how one commute in Toronto can drastically differ from another just based on the route chosen.

I decided to interview Carla – a Marketing and Communications Coordinator – and share her experiences and perspective about bicycling in Toronto.

How long have you been using a bicycle as transportation in Toronto?

This is my third summer biking in Toronto. I usually bike from May to October every year.

I still remember the day I got my training wheels off! When I was little older, I would ride my bike to and from elementary school in Victoria. On band days, I would strap my trumpet to the back of my bike. It was a heavy load for a little kid! 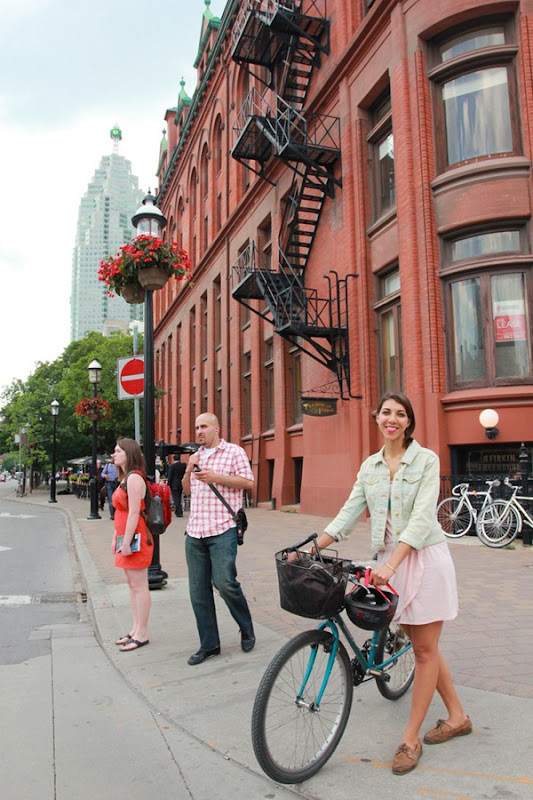 What does your typical bicycle commuting attire consist of?

I usually just wear what I’m going to wear to work, but when it’s really hot out, I’ll wear shorts and a t-shirt and then change at work. And I wear a helmet!

I live in East York, so I bike along the Danforth and then down Parliament to Yonge and Wellington. There’s no bike lane on Parliament, but the road is much smoother! The trip takes 30-45 minutes, depending if I’m going to work (downhill) or home (uphill). 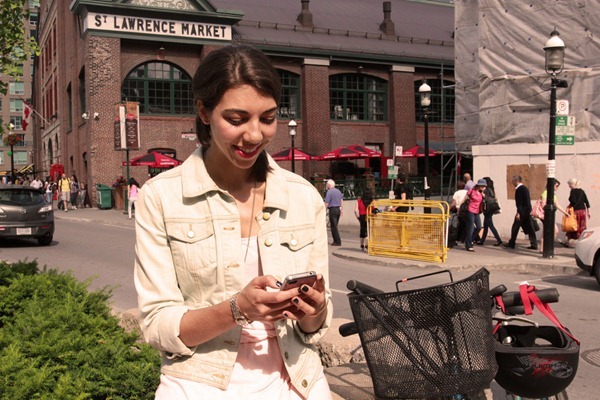 Do you feel a lot of animosity on the streets in Toronto? If yes, what do you think can/should be done to address this animosity?

No, I haven’t felt a lot of animosity on the streets. Once, a car tried to sideswipe my boyfriend and I while we were riding in the Jarvis bike lane. I think he was making a point about his displeasure over bike lanes. But those types of incidents are very few and far between. I don’t think a few idiots represent the majority of drivers in Toronto. 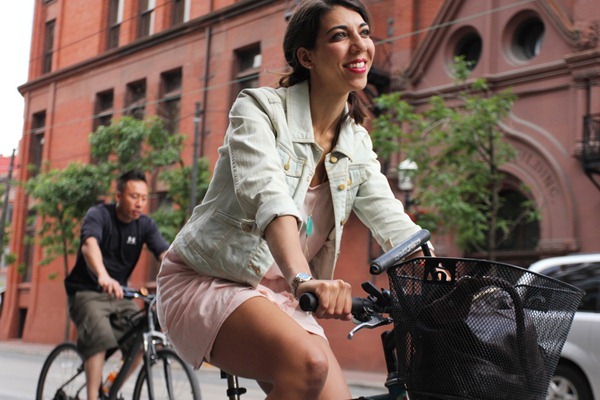 More bike lanes! They make cycling safer and eliminate stress for bikers and cars. I would also like to see some kind of “Share the Road, it’s the law” signage in some of the more congested downtown areas. I think there are a lot of misconceptions about cyclists’ legal rights to the road. I’ve been yelled at to get off the road, but the fact is, it’s within my legal rights to be there. I don’t have to ride on the side, I could take up a whole lane if I wanted to (which I don’t because I want to share the space). 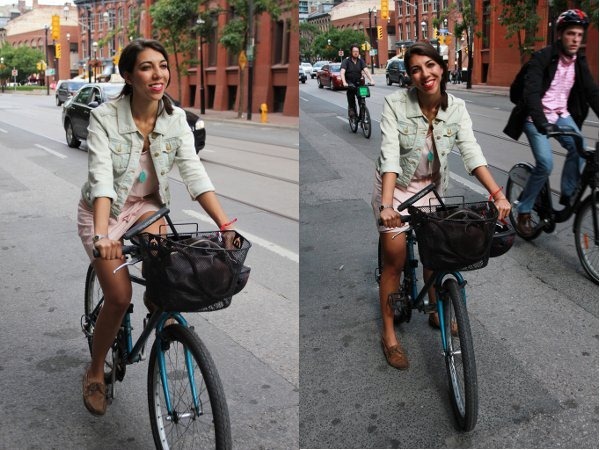 What advice would you have for somebody who is thinking about starting to use a bicycle for transportation in Toronto?

Go for a test run with a friend who has experience to gain some confidence and learn your hand signals. For your own safety, it’s important to be assertive (not aggressive) while cycling by clearly indicating your next move. And then go for it! You’ll never want to be on the subway during rush hour again once you start cycling.

Thanks Carla for sharing your perspective with our readers! And thanks to Yvonne Bambrick for the great photos!

22 thoughts on “Bicycling in Toronto: Interview with Carla Wintersgill”