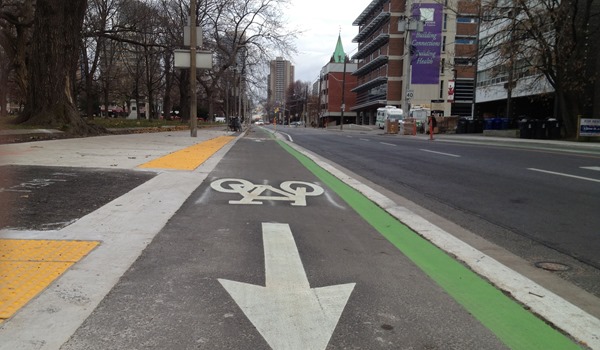 As we rode down Toronto’s first cycle track on Sherbourne Street, Copenhagen’s Bicycle Ambassador and the man behind the “Cycle Chic” trend – Mikael Colville-Andersen asks me,

Well, it’s a bit complicated. Yes, the Sherbourne cycle track is a great step in the right direction for the city of Toronto, but the removal of the Jarvis street bike lane set a very unfortunate precedent and leaves hundreds of Torontonians with unsafe conditions.

Colville-Andersen was in the city for one day at the tail end of a Canadian tour of his Kickstand bicycle policy training sessions. Toronto urban cycling consultant Yvonne Bambrick and I showed Mikael around our city, including a ride down Toronto’s first cycle track on Sherbourne street. 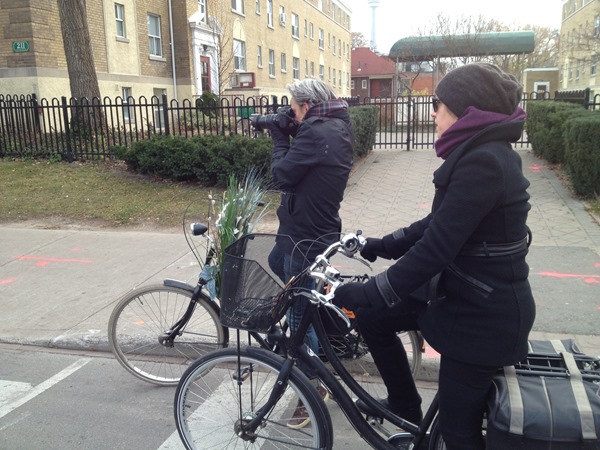 On nearby Jarvis street, people live, play, work and go to school. Toronto is the only major city in North America that is actively removing bike lanes.

Pedaling the 600 metres out of their way to the parallel Sherbourne street cycle track is not always a viable option. When you live on Jarvis street, you will at some point need to ride along Jarvis street.

The other aspect about Jarvis street is the big lie that it exposes about Toronto politicians. Mayor Rob Ford (who is now pending removal from office for a conflict of interest case) was elected on a platform of cutting costs and eliminating waste at City Hall.

Just one year after installing the Jarvis street bike lane (at a cost of about $80,000), Mayor Ford and other councillors voted to remove the Jarvis lane at an additional cost of $300,000 and re-instate the reversible centre lane, turning Jarvis back into an urban highway.

Further, the main reason cited for removing the Jarvis street bike lane was because it “increased traffic congestion”. However, what the politicians didn’t tell people is that two of the car lanes would be used for car parking 85% of the time.

So one has to wonder how much reverting to the previous street configuration will do to address traffic congestion. 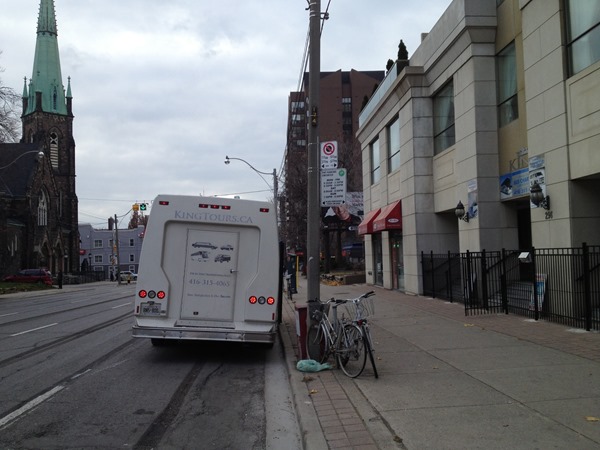 Over on Sherbourne street, you can almost smell the fresh green paint that lines the brand new cycle track.

In my opinion, the Sherbourne street cycle track was fairly well done. The track features curb separation at times, but in certain spots there is no curb, making it potentially susceptible to temporary car parking.

Whether cars decide to use the cycle track for temporary parking will depend on how many bicyclists are using the track, as well as how well car parking is enforced.

For most of its length, the cycle track is wide enough for two bicyclists to ride side-by-side, making it convenient for a bicyclist to pass another – an important feature for a cycle track with curbs. 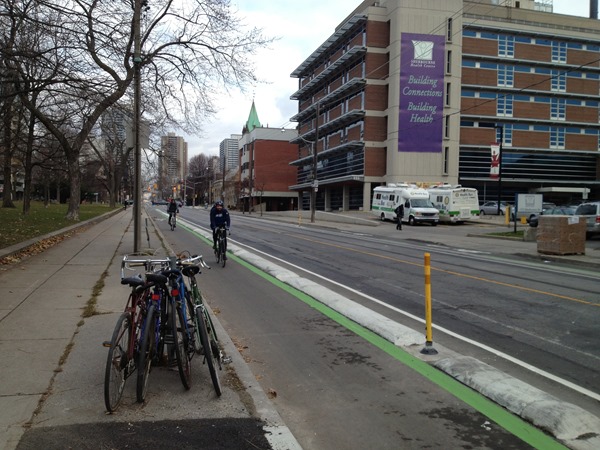 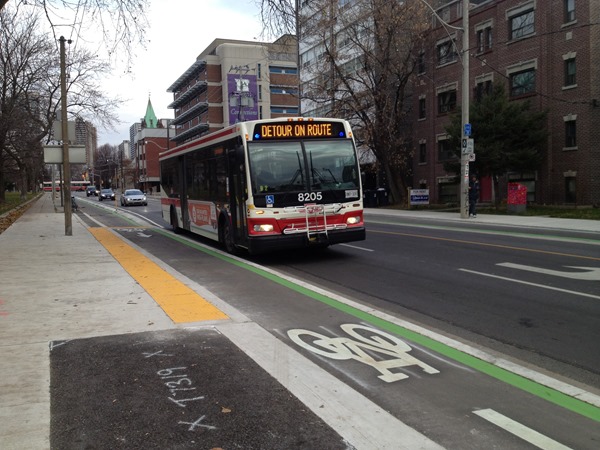 The one aspect of the cycle track that didn’t impress me is that it doesn’t continue south to connect the waterfront route. The track ends at King street in the south.

North of King street, construction crews continue to build the cycle track on the east side of Sherbourne street. 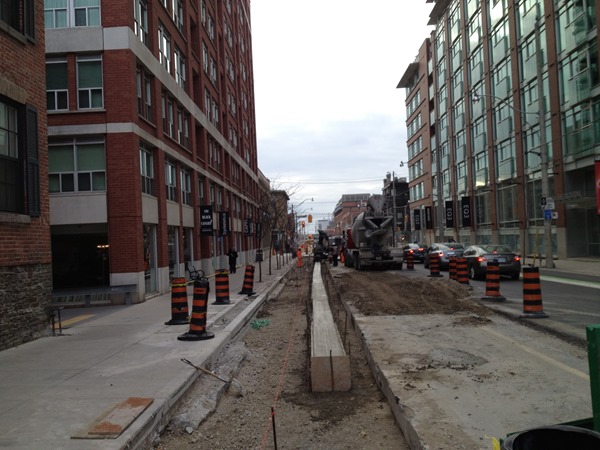 The citizens of Toronto did gain a fairly decent cycle track on Sherbourne street, but at the cost of the safety of the bicyclists who still need to use Jarvis street.

Now we have wasted $300,000 to reconfigure the road, decreasing safety for everyone and bringing us back to the 1970’s.

15 thoughts on “The Cost of Toronto’s First Cycle Track”