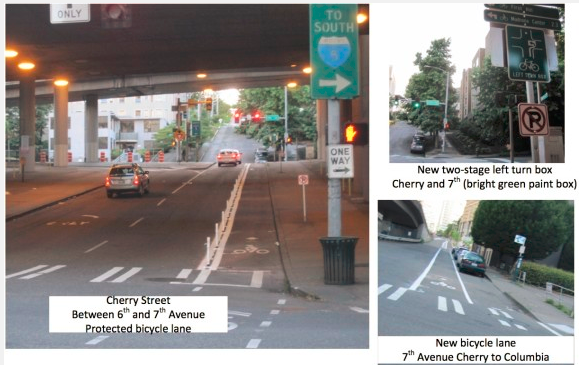 Back in April, a group of anonymous “guerrilla activists” in Seattle installed plastic bollards on a bike lane that traverses underneath an interstate highway. The group who dubs themselves the “Reasonably Polite Seattleites” wanted to show Seattle’s Department of Transportation how easy it is to improve safety for bicyclists on existing infrastructure with just $350 worth of materials.

The group said at the time:

“Our intention was merely to demonstrate how an incredibly modest investment and a few minutes of SDOT’s time is capable of transforming a marginal, under-utilized and dangerous bike facility into one dramatically safer for cars, pedestrians and bicyclists.”

“Thank you for pointing out some easy ways to calm traffic and provide more secure feeling bicycle lane on our streets. Your sentiment of unease and insecurity riding on painted bicycle lanes next to high speed and high volume traffic is exactly what I am hearing from the our residents as we update our bicycle master plan.  This strong message to me and my staff that we have be more thoughtful on facility design and implementation is being heard loud and clear.”

“The posts that you installed on Cherry Street will be removed and I am sorry about that. The posts are 36 inches high and is higher than most road bicycle handle bars. A rider can hit the post with their handle bar, which is a safety concern.

Please let me know if you would like the posts back and I will have the crew leave the post in a safe area for you to pick up. Thank you, again, for your thoughtful demonstration.”

Over the next few months, the Seattle Department of Transportation followed up by installing plastic bollards on that very bike lane, and went further by extending the bike lane to connect the network of bike lanes downtown. They made good on their promise to improve the situation.

From a letter sent by Chang to the Seattle Bike Blog:

I have good news to share.  SDOT worked with WSDOT to reinstall your thoughtful protector treatment on Cherry Street.  SDOT and WSDOT agreed to monitor the installation to determine if additional changes need to be made.  We also took this unique opportunity to make additional improvements.  We installed a two stage left turn box on 7th Avenue for left turning bicycle riders who may not feel comfortable riding with car traffic, new bicycle lanes on 7th Avenue between Cherry and Marion, and bicycle lane on Marion Street between 7th and 8th Avenue.

Additional information on the two stage left turn box can be found at: http://www.seattle.gov/transportation/docs/CherryStFactsheet.pdf

Thank you, again, for your suggestion.

What a wonderful example of how polite, civil disobedience can precipitate a constructive dialog that can lead to positive change.

Two years ago, after a pregnant Toronto mother was killed on her bicycle by a large truck, we created our own guerrilla bike lane made out of trash to illustrate how drivers will respect the space allocated to bicyclists. 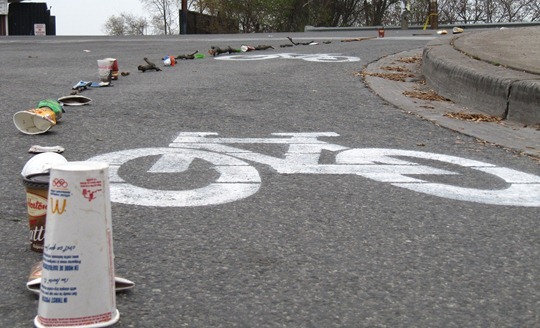 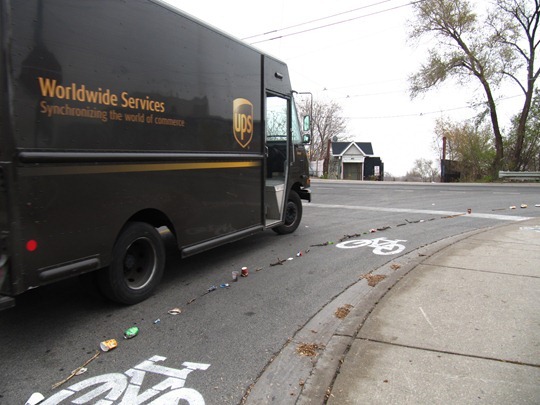 Sadly, the bicycle markings that were illegally painted above were removed by the city, and that intersection – where Jenna Morrison was killed – is still lacking any bicycle markings or infrastructure almost two years later.

So the polite folks in Seattle have had much better luck than we have had here in Toronto.