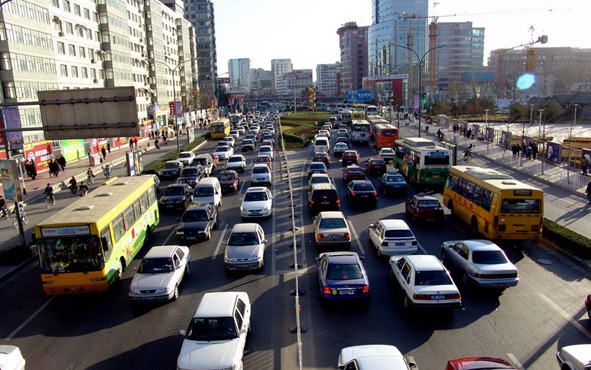 It is now official: The Urban Country is headed to China for four months this winter, beginning in January. We will be primarily staying on the southern island of Hainan in the South China Sea for the four months in Hainan’s capital city Haikou (population 2 million).

We also plan to travel to Tibet, and after waiting 31-years, I will be exploring my Grandparents’ homeland by bicycle – the Netherlands – in the spring.

This trip marks the third time I’ve visited China; the first time in 2007, and the second in 2010. This time the primary purpose is to introduce our daughter to her maternal Grandparents (whom to date have only seen their Granddaughter on Skype).

The trip has been in the works for quite some time. I left my job in July and started my own technology consulting company in order to make it easier for me to work anywhere in the world (anywhere with an Internet connection that is).

I will also continue blogging while in China, but you can expect to see some China-related content in addition to blogging about the transportation issues we face here in North America and in other English-speaking countries.

I have long been fascinated by China and the Chinese culture. The country is rapidly evolving, and its economy growing at an unprecedented pace. It is interesting to watch how everything is unfolding in that country of more than 1.3 billion people.

China’s widespread adoption of utility bicycling and its historical commitment to bicycle infrastructure in cities and suburbs alike is fascinating in itself.

All of this is threatened by the Chinese obsession with automobiles. Whereas in North America almost everybody owns an automobile, in China it is still a luxury to own a car, as most still cannot afford one.

Electric scooters have also experienced explosive growth and are also dominating Chinese streets – especially in the tropical climate on the island of Hainan, where I will be spending most of my time. 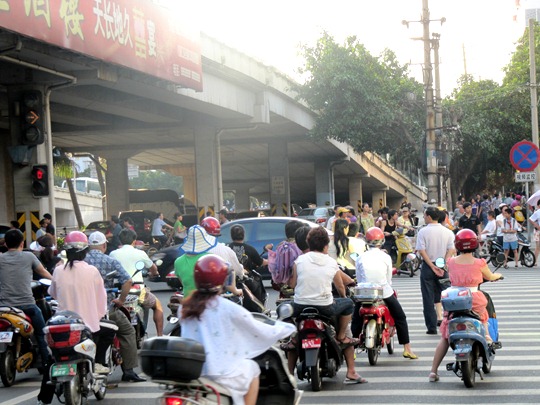 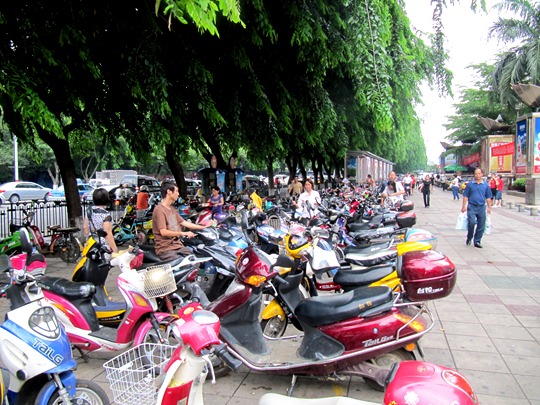 Blocks and blocks of parked scooters in Haikou, Hainan, China – May 2010 – Photo by James Schwartz

Here is a video of me biking around Haikou in 2010 on a Giant folding bike I picked up for less than $100:

The current elusiveness for the average Chinese person makes car ownership a hot commodity. My good friend Mark has lived in Shanghai for several years, and here he comments on the growing car culture in China:

“It’s really disturbing how car ownership is so ingrained in this culture as the pinnacle of success. It comes second only to owning your own place. In fact, on reality dating shows (and likely in other aspects of culture), the two are almost always put together in to one ‘sentence’ (or concept):  有房有车，which translates literally to ‘have (own) place, have car’. It’s usually the first question these guys are asked (along with their salary).

If you type the first two characters in Google, the full phrase will come up as a top suggestion, which speaks to how culturally ingrained the concept is.”

Nevertheless, Chinese cities are becoming clogged with traffic congestion and fraught with pollution. Just last year we reported on a 100KM, 9-day traffic jam on the Beijing-Tibet “Expressway”.

The Chinese obsession with car culture and the devastation that it would cause if left unchecked is the topic of a documentary film I am hoping to produce one day. In the film we would interview everyday Chinese people who cannot afford cars to hear their viewpoints. We would also interview government officials, car company executives and wealthy Chinese.

The film would serve as a wake up call to the country to continue its support for bicycles and public transit and continue to fight back against a growing car culture that it cannot sustain.

Chinese cities have been limiting the number of cars that are allowed to be licensed in order to attempt to tackle congestion and pollution. In December 2010 the Beijing government announced it would limit its 2011 issuance of new license plates to 240,000.

In the first 11 hours of 2011, nearly 40,000 online applications for new car license plates were received in Beijing, and the government chose the “lucky” (or unlucky) winners by drawing names from the list of applicants.

Other measures were taken to help address congestion – parking prices were increased and during the Olympics in 2008 Beijing launched an “odd-even license plate number system” that allowed drivers to drive every other day.

In addition to limiting license plates, the government has invested billions in high tech public transit and much of China’s bike infrastructure has not yet been reclaimed to make room for automobiles. The Chinese government is taking drastic measures to attempt to prevent a disaster.

Even in the countryside I saw high-quality separated bike infrastructure being built in 2010, so the Chinese government still seems to be committed to providing alternate means of transportation.

If China decides to sacrifice bicycle infrastructure, the problems that we see in North America will only be multiplied due to China’s population. The government really has no other choice but to maintain bike infrastructure in order to alleviate congestion and tackle pollution.

Beginning in January, expect to see some more articles relating to the transportation challenges that China is facing.

18 thoughts on “The Chinese Car Obsession”