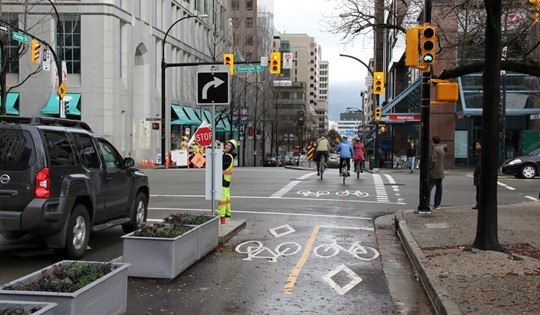 In an opinion piece posted on straight.com (Vancouver’s Online Source) an ignorant political candidate named Ken Charko has proposed to make Vancouver’s bike lanes seasonal and turning them into metered parking for the “winter”.

Defining “winter”, Charko proposes closing the bike lanes down from October 1st to March 31st. Except the average mean temperature in Vancouver in October is 11.1 degrees Celsius (52 degrees F).

And the average mean temperature in Vancouver never goes below freezing, so snow in Vancouver is rare and when it does snow, it often doesn’t stick in the ground for any prolonged period of time.

Vancouver is an ideal place to use a bicycle year round, and shutting the bike lanes down “for the winter” shouldn’t even be conceivable for anyone with even a marginal level level of common sense.

Clearly the argument that “winter is 6 months long” is just an excuse that the anti-bicycling crowd uses to rail against a form of transportation that they feel threatens their way of life and their addiction to their automobiles (and there are many).

Unfortunately, this ignorance makes it more difficult for conditions to improve for cyclists, even though better conditions for bicycles would benefit car drivers because the more options people have for transporting themselves, the less cars there will be clogging the streets. More people can be moved more efficiently with less space.

Arguing against alternatives is actually making it worse for drivers.

And perpetuating the myth that winter is “6 months long” in Vancouver shows that this political candidate takes voters for fools. I’m confident voters will see through this deceit tactic.

Straight.com also posted this response from the Vancouver cycling community.