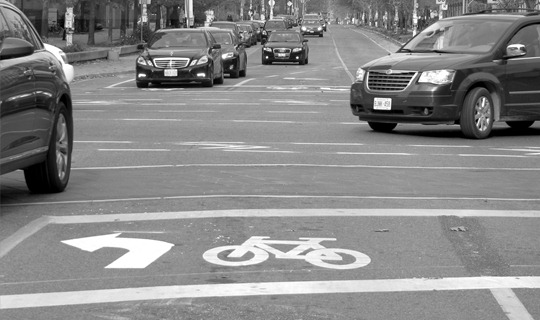 Left turns are one of the most dangerous manoeuvres to execute on a bicycle in North America. Of course, this doesn’t have to be the case. Many cities have engineered infrastructure to make left turns safe and comfortable for bicyclists.

But here in Toronto – and most other cities in North America – turning left legally is unsafe.

Here’s why: In order to make a legal left turn on a two-way street in Toronto, you must first merge from your normal riding position on the right side of the road to the left-most lane. This in itself can be dangerous and is unnecessary.

Next, you need to wait for oncoming traffic to clear before you can proceed with your turn. If you are fortunate enough to have a separate turning lane, then you will be immune from impeding traffic behind you.

However, in many cases in downtown Toronto, you will not have the luxury of a turning lane – so you will inevitably be unnecessarily holding up already-frustrated motorists.

Being someone who avoids unnecessarily dangerous situations, I rarely make legal left turns on busy streets in downtown Toronto for the reasons stated above. In a 2009 commute to work video I posted on blogTO.com, I was criticized by a commenter for doing a hook left turn using the pedestrian walkway.

In the absence of proper infrastructure for left hand turns, I recommend that bicyclists enter the pedestrian area to make a hook left turn (when it is safe to do so). This involves staying to the right, and pulling into the pedestrian crossing area, then waiting for the alternate light to turn green.

A hook left turn could easily be accommodated with a tiny bit of infrastructure. Here is a diagram of the safer hook left turn bike box – courtesy of Inscrutable Ted: 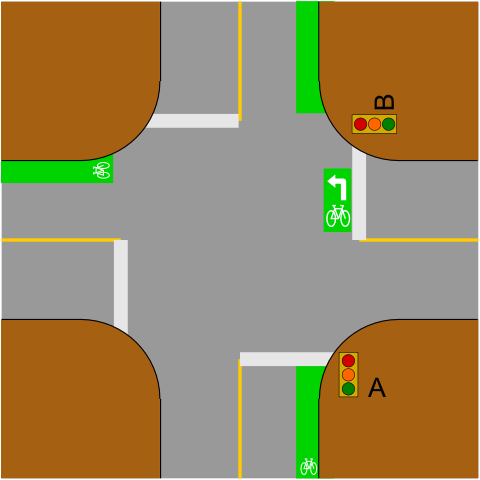 This infrastructure reduces unnecessary conflict between motorists and bicyclists because the bicyclist isn’t forced to hold up traffic while making a left turn.

Here is a video from our friend AlexWarrior that nicely demonstrates a hook left turn in Vancouver. Watch the video in the bottom left corner:

Instead of accommodating the hook left turn, the City of Toronto seems to think that traditional bike boxes are the solution for safe left turns.

A bike box is a painted area that allows bicyclists to gather at a traffic light in front of automobiles. This helps improve visibility and reduces the chances of cars right hooking bicyclists while turning right.

Here is how Toronto is proposing to accommodate left turns using bike boxes. 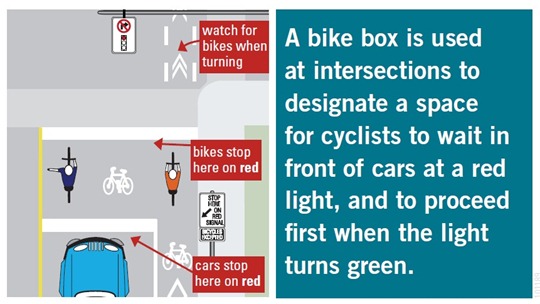 One can imagine the hostility of the motorist in the blue car for having to wait for a bicyclist to turn left while he is trying to proceed straight. This is an avoidable and unnecessary conflict.

Here is a photo of a recently implemented bike box with a left turn area in Toronto: 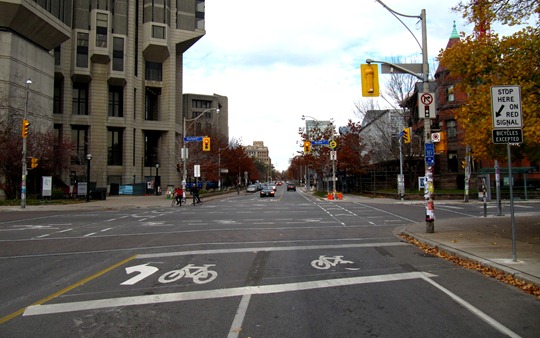 Fortunately this left turn lane for bicycles includes a separate left-turn lane for automobiles, so a left-turning bicyclist wouldn’t be forced to hold up traffic to make her left turn.

However, these bike boxes are inadequate because the markings don’t make it obvious enough to motorists that they need to stop behind the first white line.

Here are two photos of a typical bike box in Portland, Oregon that take this into account: 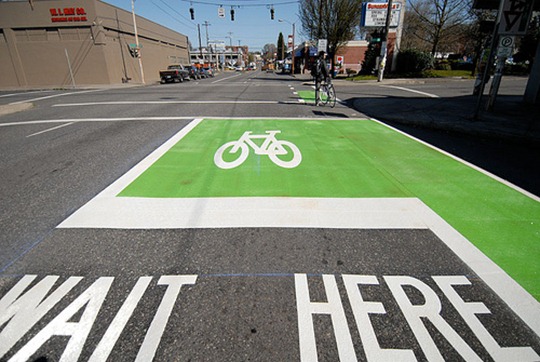 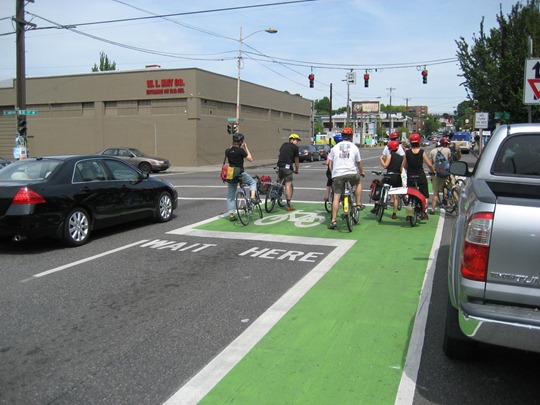 Toronto’s implementation seem to cause confusion for motorists. While taking these photos, it didn’t take long for me to witness several motorists ignore the bike box markings: 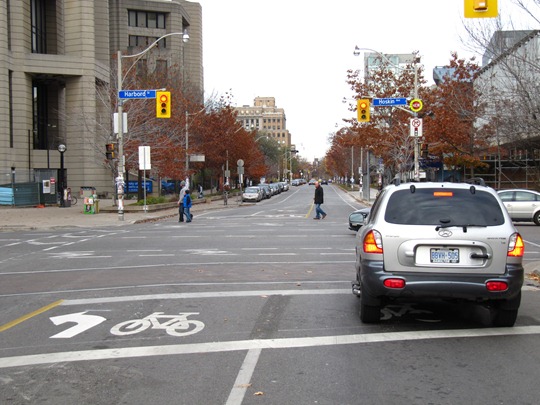 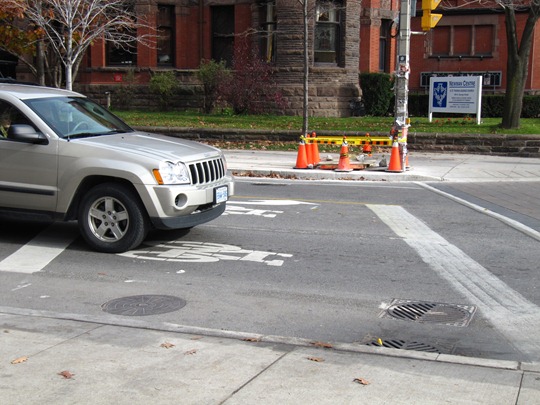 Bike boxes aside, other cities support left turns for bicycles in different ways.

The Chinese approach is fairly simple and doesn’t hold up motorists: Bicyclists have a left turn signal that allows them to turn left from their bike lane to the other bike lane on the perpendicular road.

This bicycle turn signal works in conjunction with the automobile left turn signal so that bicycles and cars can both turn at the same time – each staying within their own painted lines while making their respective turns.

This approach eliminates the need for bicyclists to merge into traffic, but one must still be cautious while making a turn because motorists are turning at the same time. The Chinese aren’t known for staying within the painted lines. 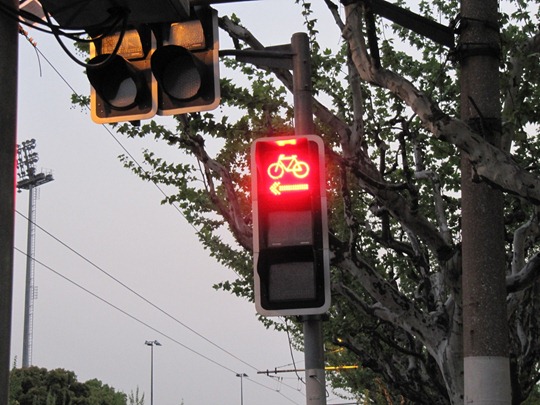 The ideal implementation for left turns of course comes from the Dutch. Some Dutch cities have physical separation between motorists and bicyclists even for left turns to avoid any possible conflict between the two. Here is a typical Netherlands junction with separate signals for bicyclists: 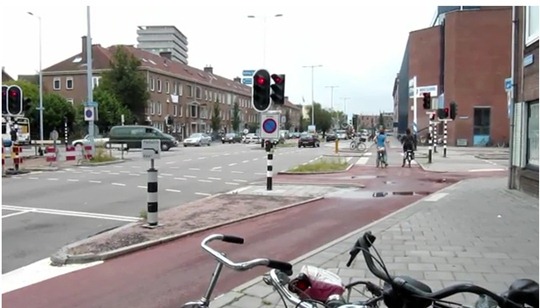 Bicyclists are able to proceed and immediately make a protected two-phase hook left turn while motorists wait. This wouldn’t be a hot seller in North America’s car-centric culture, but perhaps this will change as more people start using bicycles for transportation.

This type of implementation also requires a significant amount of space to implement, so it wouldn’t work on all streets. In dense cities where space is limited, a hook left turn implementation would suffice for safe left turns, and would be substantially better than our current method of forcing bicyclists to merge into traffic to make a left turn.