“The Fixer” Not Fixing Anything 30 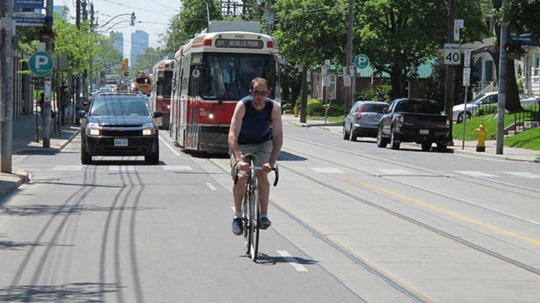 Photo of a cyclist passing the photographer who was probably blocking the right lane. Photo by Jack Lakey / Toronto Star

Below is an open letter from me to a Toronto Star writer Jack Lakey, who calls himself “The Fixer” because he fixes things that are “broken in your neighbourhood”.

The Fixer recently wrote an article about how bad cycling habits can be deadly in the aftermath of a collision between a cyclist and a pedestrian which left the pedestrian critically injured (thankfully she is expected to recover).

Your recent “Fixer” article about how bad cycling habits can be deadly does not “fix” anything, and quite frankly, your rant that reveals your utter disdain towards cyclists only contributes to animosity on our streets, making the situation even worse for everyone (including courteous cyclists like myself).

It isn’t acceptable for adult cyclists to ride on the sidewalk, but why do you think some people do it? Maybe they do it because they were brushed by an automobile passing at a dangerous speed by an inconsiderate motorist who has a hate-on for cyclists that results from the same animosity you are perpetuating in your very article.

If you really wanted to fix something, you would offer solutions, not just rants. Sure, rants are more catchy and get more attention, but you have a reputation as “The Fixer” to live up to. That should take precedence over cheap media ratings.

A solution that would help address the situation you are ranting about is better infrastructure for bicycles in Toronto to make it safer for cyclists so they aren’t tempted to skirt the law to keep themselves safe. I avoid “legal” left turns, because they simply aren’t safe on busy streets. If we had better infrastructure to allow safe left turns, we wouldn’t need to break the law to safely turn left.

Education is also important. We need to train drivers how to co-exist with cyclists on our streets, and we need to teach cyclists riding skills at a young age.

I also question the disproportional attention you are giving to chastising cyclists. Did you know that in the same time frame that one pedestrian was killed by a cyclist, more than 200 were killed by motorists? Why not rant about motorists every time a pedestrian is killed by a car? I guess that wouldn’t make much of a story because it happens so often.

Wouldn’t a good “Fixer” solution be to lower the speed limits for automobiles in the city to help prevent the killing of 30-40 pedestrians each year in Toronto? Is it really necessary to allow cars to drive 50km/h on our downtown streets? Our streets have a mix of transit users, cyclists, motorists and pedestrians sharing the same space. 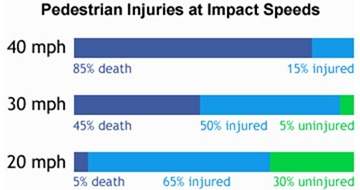 In addition to the 30-40 pedestrians who are killed each year by cars, there are 440 premature deaths each year that result from exhaust fumes. Why not propose solutions to give Torontonians better options other than driving a car in our city to help minimize those 440 deaths?

I also have a beef to pick with you about the tagline you put on the photo in your little rant. You stated in your tagline “A cyclist rides between two lanes of traffic on eastbound Queen St. E., west of Woodbine Ave”.

Clearly this tagline is deceptive and lacks the journalistic integrity that I would expect from a large publication like the Toronto Star. It is clearly designed to further propagate animosity towards cyclists and to “prove” your point that cyclists are selfish and entitled to the point that they take 2 car lanes away from motorists.

In reality, the cyclist in this photo is most likely approaching a parked car, which would explain why they would move to the left of the lane. We cyclists often need to go into the left lane to avoid the “door zone” in our city that lacks proper bike infrastructure.

In fact, it could very well be the photographer that the cyclist is approaching (that’s you!), and you may very well be standing behind a parked car (perhaps it’s your car too!). Please have more respect for your readers and not try to deceive them like this.

But instead of making our streets more dangerous for cyclists who ride courteously, please use your influence to make thing better for everyone.

Help us push for real solutions. I’m just trying to get to my destination like everyone else, and I don’t need drivers to be unnecessarily pissed off at me and put my life in danger because of your angry rant.

PS: If you look at some of the articles on this website, you will find lots of solutions. Not just rants, but real solutions.

* Update July 10, 2011 at 11:30PM: The caption in the photo accompanying The Fixer article has now been updated to read “The Star’s Jack Lakey says tragedy can be avoided if more cyclists believe the road rules apply to them.” Thanks Jack for correcting this, and thanks to Andrew Smith for pointing this out.

30 thoughts on ““The Fixer” Not Fixing Anything”