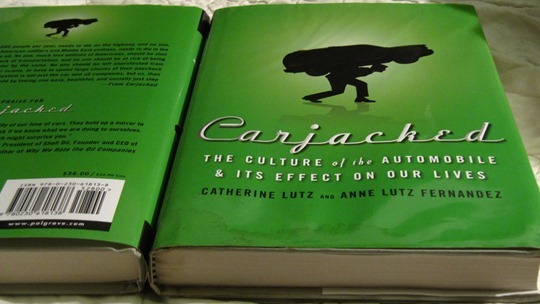 Carjacked: The Culture of the Automobile & Its Effect On Our Lives – Photo by James Schwartz / The Urban Country

I finally picked up a bunch of copies of the book Carjacked: The Culture of the Automobile and Its Effect on Our Lives. The book is written by Catherine Lutz and Anne Lutz Fernandez, two sisters who loved their cars as much as any American when they started investigating the consequences of the American car culture while doing research for the book.

The wonderful thing about this book is that it is not written through the lens of a bicycle advocate, or a hard-core environmentalist. Anne Lutz Fernandez is an ex Wall Street businesswoman, and Catherine Lutz is an Anthropologist.

These sisters grew up immersed in car culture, with fond memories of car expeditions that “carried us through our happiest family adventures”.

“Between the two of us, we have owned nine cars and driven eleven others belonging to the important people in our lives – our parents, boyfriends, husbands. We have driven or ridden an estimated 600,000 miles, consuming around 30,000 gallons of gas. To do this, combined, we have spent an estimated 25,000 hours in the car – if this were a job, each of us would have been at it for 3,125 eight-hour days, or more than six years of our lives.”

The book contains some great bits of information about America’s addiction to car (which extends here to Canada as well to a more limited extent).

Instead of tweeting every time I came across a good sound byte, I decided to share them here instead. The following quotes are some of my favourites so far. Feel free to copy them into Twitter. I confirmed they are all within Twitter’s 140 character limit (except for that long ass one):

“We are convinced that the world is too dangerous to allow independence to our children. This obscures the fact that a child is far more likely to be killed in the family car than riding a bus.” #carjacked

“Automotive naming and commercials have headed into the wilderness, perhaps as wishful compensation” #carjacked

“We treat as normal what would otherwise be untoward; putting our beloved children in the thing most likely to kill them” #carjacked

“Of the top 15 Senate recipients of car industry largesse, not one voted for a 2005 bill raising fuel economy standard for cars” #carjacked

These quotes give you a small glimpse into this thoughtful book that takes a hard look at our addiction and reliance on cars.

To pick up your own copy of Carjacked, check your local bookstore or buy it on Amazon.com for just $18.48. Or if you are in Toronto, I have plenty of copies here and I’d be happy to give you one.

12 thoughts on “We’ve Been Carjacked”