Is Bicycling Gaining Momentum in India? 6 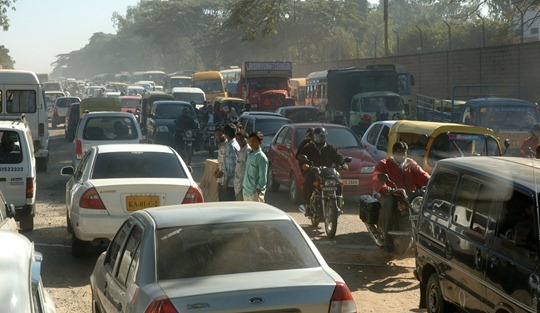 Mohamed Tharik, a young executive at Ness Technologies explains that he initially started riding a bicycle to work for the exercise, but his bicycle quickly became “a way of life”, as he says he uses his bicycle to “get everywhere”.

However, when bicycles gain popularity in car-clogged cities, cyclists will inevitably encounter angry drivers who view cyclists as a threat the sacred pavement space in our cities. This is precisely what is happening to Mohamed in Bangalore:

“Cycling itself can pose its fair share of problems. “Within the city, it is a problem during peak hours because I have realised that people in vehicles just don’t respect cyclists.”

Gaining respect from drivers in car-clogged cities is indeed an uphill battle – especially when cyclists aren’t given properly infrastructure designed to reduce conflict with motor vehicles.

Unlike its Asia neighbour China, India has very few dedicated bicycle facilities. In 2005, three separate 10-foot wide physically separated cycle tracks were proposed in Pune, India for students of 21 schools in the central area to safely get to school.

The proposal sounded great in theory, but a 2010 report indicated that the actual implementation of these separated cycle tracks in Pune were less than desirable:

“Ranjit Gadgil, programme coordinator of Parisar, who has been using a bicycle for several years, said the city lacks good cycle tracks. “The ones built by the PMC are mostly unusable. Encroachments and improper designing of the tracks have rendered them beyond use. Cycle tracks have to be continuous for a long stretch, but that is not the case. Also, the surface is of poor quality because interlocking blocks have been used. This makes bicycle users prefer the tar road instead of the cycle tracks,” he said. Such a choice lands them in unsafe zones.

Gadgil pointed out that besides encroachments, there are obstacles like booths, buses, and road signages on cycle tracks. “Just as roads are maintained, cycle tracks should get attention and be cleaned regularly. The city has 80 km of cycle tracks, but each one has a different design. At road intersections, the design is most improper. Clear signs or notice boards will help cycle users easily identify them. At most places, tracks merge with footpaths,” he said.”

Gadgil also said that parents are reluctant to let their children cycle to school due to the scary road conditions.

According to a 2010 article on the cycling blog On Our Own Two Wheels, Pune, India has 140km cycle lanes. However, encroachment seems to be a major issue, leading cyclists to end up riding on the roads instead of on dedicated bicycle infrastructure.

Here are two photos from On Our Own Two Wheels highlighting the encroachment issue: 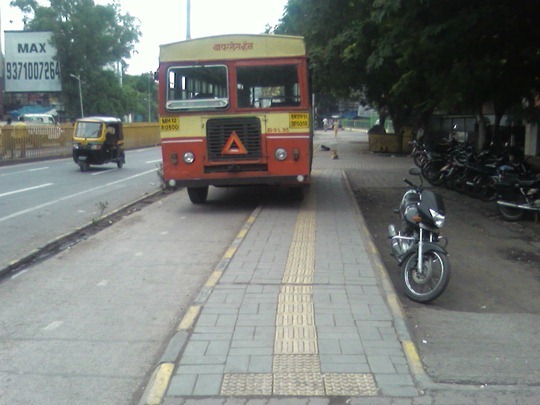 Photo courtesy of Ezra Goldman / On Our Own Two Wheels 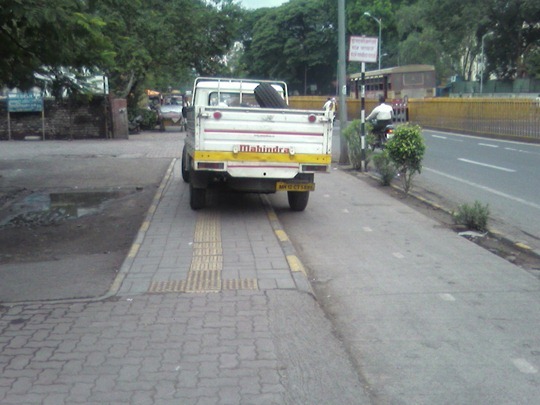 Photo from Ezra Goldman / On Our Own Two Wheels

Ezra Goldman from On Our Own Two Wheels questions whether the concept of physical separation makes sense when there is a mix of traffic “that includes buses, cars, cyclists, cows, auto rickshaws and the occasional horse or elephant even”.

To me, it’s a design issue – when implemented properly physical separation will work – even with a wide array of road users sharing the streets. China probably provides the nearest examples of cities that resemble India’s transportation landscape, and the Chinese have successfully implemented physically separated lanes.

A work acquaintance of mine who lives in Hyderabad, India, a city of close to 7 million explained to me that few people use bicycles in his city. He explains that the people who can afford a car will drive, and most other people are either riding motorized two wheelers or transit.

Back in Bangalore, the cycling trend that is growing within the Middle Class rings familiar here in North America, where people are slowly starting to see the benefits of using a bicycle to get around.

“Despite the problems, many today are keen on cycling. “At work, I know at least seven people who come to work in cycles and I, myself, am part of a cycling group in office where we arrange a biking trip,” he said.”

Riding a bicycle provides freedom from being stuck in traffic congestion which makes commuting a far more enjoyable experience than being stuck in a car. The fact that it costs nothing is just a bonus.

These are simple facts that Indians are starting to discover as they deal with their rapidly growing economy in densely populated urban areas with limited surface space.

6 thoughts on “Is Bicycling Gaining Momentum in India?”