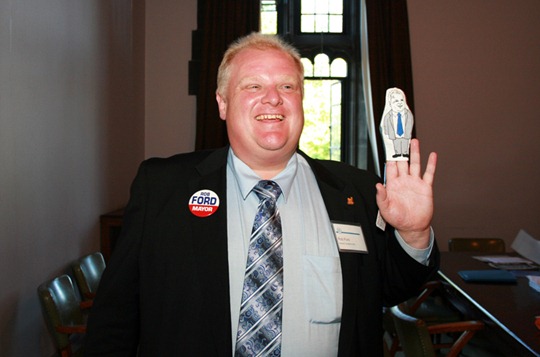 A man once said,

“I can’t support bike lanes. How many people are riding outside today? We don’t live in Florida. We don’t have 12 months a year to ride on the bikes.

And what I compare bike lanes to, is swimming with the sharks. Sooner or later you are going to get bitten. And every year we have dozens of people who get hit by cars, or trucks. Well no wonder, roads are built for buses, cars and trucks. Not for people on bikes.

And you know, I feel, my heart bleeds for them when I hear someone gets killed. But it’s their own fault at the end of the day.”

On October 25th, 2010, the city of Toronto elected this man – one Rob Ford – to be our mayor. Yes, this Chris Farley look-a-like, Sarah Palin sound-a-like is the honourable leader of our city of 2.5 million people, managing a budget of over $10 billion dollars a year.

While other great cities around the world are electing mayors that realize that automobiles take up too much space and are progressive about providing people with great alternatives, Toronto has elected a mayor whose viewpoint puts us in a time machine back to the 1970’s.

Head to your closets and pull out those bell-bottom pants and go to your garage to dust off your AMC Gremlin. The next four years could be a flash in the past.

But not everything is doom and gloom. At the end of the day, Mr. Ford needs to keep his people happy, and he has plenty of progressive bike-friendly Councillors to help keep him in line.

In Mr. Ford’s transportation plan, he has at least acknowledged that we need to provide a better network for bicycles in the city.

Ravines are great for recreational bicycling, but what Toronto really needs is better bike infrastructure for people traveling to work, to the store, or to a restaurant. This is what Mayor Bloomberg is doing all over New York City. This is what Mayor Gregor Robertson is doing in Vancouver, and we hope that the newly elected Naheed Nenshi will do the same in Calgary.

In a mayoral debate in March, Mr. Ford clarified his perspective on bike lanes:

Ford points out that bike lanes don’t make sense out in the suburbs where there are 18-wheelers pulling in and out of factories. But if he lived downtown, he could see bike lanes making more sense.

Mr. Ford brings up a really great point. Canada has jumped on the “bike lane wagon” without proper analysis on whether bikes lanes actually make sense or not.

Just last weekend I was out in Vancouver and we headed about 70km north of Vancouver to climb a mountain. On the Sea-to-Sky highway there were bike lanes on some stretches of the road. The bike lanes had no physical or painted buffer between automobiles traveling at 100km/h+.

This makes absolutely no sense. Bikes don’t belong two feet away from automobiles that are traveling over 100km/h. It’s neither comfortable nor safe to do this. Thus it was no wonder that I didn’t see a single bicycle in this bike lane.

The  interesting part about the Sea-to-Sky highway bike lane is that there is a concrete barrier to the right of the 3-foot bike lane. So it’s puzzling why they didn’t move the concrete barrier three feet to the left, and let bicyclists ride on the opposite side of the barriers.

The answer is simple – the bike lane is merely a highway shoulder splattered with some paint.

This is where Mr. Ford is absolutely right. Bike lanes that are nothing more than a line of paint aren’t necessarily doing any good. What we need is physical segregation where it makes sense – on roads where there are fast-moving automobiles and transport trucks.

Toronto has experimented with physically segregated bicycle facilities in the suburbs – on Eglinton Ave. These physically-separated bike paths provide a comfortable, direct path along a major suburban arterial road. This is what the suburbs need more of.

Unfortunately, the Eglinton Ave. path is mostly disconnected from other safe bicycle routes, so riding along fast-moving traffic is almost inevitable – unless one wants to take a winding, indirect recreational route.

If nothing else, Ford and I can at least agree on one thing – that bike lanes aren’t a one size fits all solution.

But Ford will nonetheless be hearing plenty from me in the next 4 years. Hopefully he will start to realize the importance and viability of bicycles as a mode of transportation now that he is representing the whole city instead of a small suburban ward.

Either way, we will certainly have our work cut out for us. It’s going to be a wild ride.