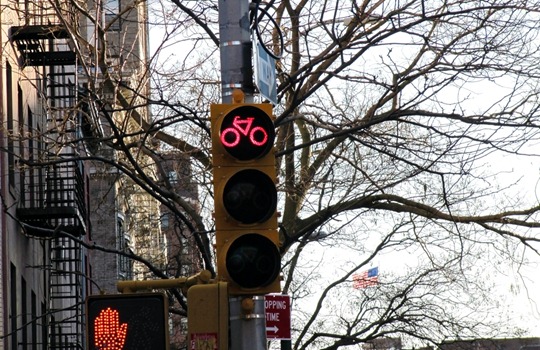 The City of New York has had tremendous success in the last 4 years of building a network of bicycle infrastructure to improve safety and comfort for New Yorkers to use bicycles as transportation. These policies, spearheaded by NYC Department of Transportation Commissioner Janette Sadik-Khan and Mayor Michael Bloomberg have resulted in increased safety on New York’s streets.

According to this New York Daily News piece, the number of bike commuters has increased by 79% in the last 4 years, and streets with bike lanes see 40% fewer crashes. For example, since installing a protected bike lane on 9th Ave, injuries have reduced by 56% for all road users.

Bicycle infrastructure and narrower car lanes has a calming effect on traffic that results in improved safety for everyone.

But near-record snowfall levels in the city this winter have seemed to escalate the tension between those who support this bicycle infrastructure and those who feel that motorists are being subjugated by bike-friendly policies.

The tensions began escalating in January, when 24-year-old Councilman Eric Ulrich (R-Queens) proposed that all bicyclists should be licensed and registered with the city. He claims that this would allow the police to hold bicyclists accountable for running red lights.

“I have never, never seen a cop car pull over a bicyclist for running through a red light. I wish they would, because those are the ones who are creating problems every day in the city. If these people are not obeying traffic laws, they should be held accountable

Bicyclists are the ones creating problems every day in the city. Right.

Let’s ignore the fact that an average of 340 people were killed every year on New York streets from 2000 to 2007. It must be all those bicyclists running red lights that killed an average of 170 pedestrians every year during the same time frame.

Councilman Ulrich’s proposal must have struck a chord at the NYPD however, because shortly after his proposal, the NYPD decided to dedicate its valuable policing resources to target cyclists – including handing out $270 tickets for cyclists running red lights in Central Park.

If it wasn’t enough to have to fight a councilman against bicycle licensing, another Councilman (James Oddo – R-Staten Island) is proposing to make it mandatory for the city to do complex multi-year environmental assessments on all new bicycle infrastructure.

This would effectively handcuff the city from building any new bicycle infrastructure.

Oddo clearly has a bone to pick. His contemptuous proposal for an environmental assessment seems to be more out of spite than sound reason. He told the New York Post:

“To add one left-handed turning lane [on Staten Island], it’s taking us eight to 12 years, yet there have been all of these bike lanes installed without any bumps in the road. How is that possible?”

Despite his successes in improving traffic safety in New York, even Mayor Bloomberg caved to political pressure, conceding that he should have consulted with more residents before installing some of New York’s bike lanes:

“Bicycle lanes are one of the more controversial things, obviously,” Bloomberg said. “Some people love ’em and some people hate them… It’s probably true that in many of these cases we could do a better job and we’re going to try to do that.”

More recently, Brooklyn Borough President Marty Markowitz rode into his “State of the Borough” meeting on a tricycle and spoke out against bicycle infrastructure using one side of his mouth, while claiming to care about the safety of citizens out of the other:

“Cycling is no substitute for mass transit, and there are still tens of thousands of Brooklynites who live far from public transportation and who rely on a car to reach their jobs and live their lives. But of course, we must have a comprehensive plan that insures the safety of drivers, walkers and cyclists. And we should all remember to show respect to one another — drivers, cyclists and pedestrians, everybody who uses our streets. I have been a vocal critic of the Prospect Park West bike lane because I think it is a perfect example of how not to install a bike lane. It has disrupted the aesthetics of one of Brooklyn’s most beautiful thoroughfares and made it more dangerous to cross the street safely, especially for seniors, young children and parents with strollers.”

New York’s ambitious plan for building a complete network of bicycle infrastructure calls for an astounding 1,800 miles of lanes by 2030, with 50 miles added each year.

All New Yorkers will benefit from having a network of bicycle infrastructure, so it is in their interest to support these measures.

But it won’t be an easy fight to achieve it. It never is in North America.