The Bicycle as a Status Symbol 33 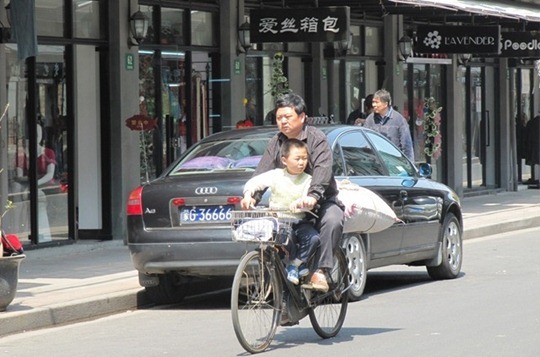 Man & son ride a bicycle past an Audi car in Shanghai – Photo by James D. Schwartz / The Urban Country

One of the biggest barriers to increasing bicycle transportation in many western countries is the fact that it is difficult to express one’s wealth and status on a bicycle. People are generally drawn towards people who appear wealthy (even if wealth is often just an illusion in our personal debt-ridden society).

A luxury automobile is the easiest way to express one’s wealth to strangers in the public realm. Luxury cars are indeed head-turning, attention-grabbing toys, and they allow men to compensate for their own insecurity or other personal deficiencies.

Rightly or wrongly, this is how our society works, and using a bicycle often leads people to believe a person is choosing this method of transportation due to their inability to afford a car.

We work very hard on this website to show that there are many benefits to using a bicycle – and the frugality of a bicycle is but one of these benefits, and certainly not the main reason why people ride a bicycle. People mainly ride bicycles because of the convenience, speed and the predictability in arriving to their destination in a consistent amount of time.

I have friends who insist they pick me up in their car if we’re meeting somewhere. They can’t understand why I would rather take my bike than accept a ride in their car. The best way to explain it is to have them imagine that my bicycle is a convertible automobile. I would rather have the wind in my hair and the enjoyment of riding my bike to the destination than sit inside a boring car.

A new trend is beginning to emerge in China, where wealthy men are buying expensive luxury bicycles as a more pragmatic means of transportation, while still allowing them to expose their wealth and status.

A report by Pang Qi for the Global Times in Beijing highlights this new trend. Qi writes:

“Zhao Huizhen, a Beijing resident who has worked as a civil servant next to Sanlihe Road for almost 25 years, never imagined that bicycles, which people used to ride to work every day, would actually become in-demand luxury items sought after by China’s nouveau riche.

From Ferrari to Lamborghini, bicycles now manufactured by some of the world’s first-class automakers are gradually gaining in popularity as industry experts have predicted a return to the bicycle since cars have experienced booming development in recent years.

During the 21st China and International Bicycle and Motor Fair in Nanjing, Jiangsu Province this May, UCC bicycles, which are made in Taiwan, sold out even though they cost 50,000 yuan ($7,730) each, according to the Beijing magazine Oriental Outlook.

Xie Jian is the eastern China director for the Qida Trade Corporation, which is the same company that sells Ferrari in China. He told the magazine that at least one Lamborghini bicycle, which costs 345,000 yuan ($5,334), the most expensive kind found in Wenzhou, Zhejiang Province, is sold every one or two months. A young Ferrari car owner came to him specifically to buy a Ferrari bicycle, which goes for 20,000 yuan ($3,092), Xia said.”

With China’s emerging wealth, rapid economic growth and competitive markets, status is important for business and those who are wealthy love to show it off with their expensive cars. 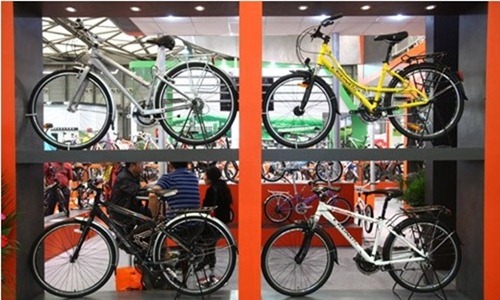 But the Chinese are already coming to terms with road space capacity and dealing with traffic jams that last days and span across dozens of kilometres. It’s only a matter of time before the Chinese turn back to the bicycle to embrace a mode of transportation that has provided them the freedom of mobility for more than a hundred years.

Related Articles on The Urban Country:

“As Zhao recalls, some 20 years ago here in the capital, when a traffic light would turn green at an intersection, rows of bicycles would swarm out into the street, and the scene would always look somewhat “grand.”

For people like Zhao, riding a bike back then was anything but a showcase of a person’s wealth.

Read the full article on the Global Times

Seeing wealthy Chinese people already turning back to the bicycle is a sign that the rapid growth of the automobile in China might have peaked in some of China’s most heavily populated cities.

Riding a bicycle in China is largely viewed by Chinese people as something that only foreigners and poor people do. But Chinese people also have fond memories of using bicycles for transportation during their childhood – a far more rosy picture than the current automobile gridlock that they encounter in modern day China.

If a bicycle can become a status symbol, Chinese people may look at bicycles as more than just a pragmatic, efficient way to get around Chinese cities and the growing wealthy class of people may embrace bicycles again just as they did when they were growing up.

The Urban Country last visited China in 2010. Check out our collection of articles from China that highlight the role that the bicycle plays in Chinese cities even to this day. Thanks to our friend Mark Green for sending this story. Mark is an expat living in Shanghai.

33 thoughts on “The Bicycle as a Status Symbol”